When Survivor Series made its debut in 1987 I was instantly hooked. I loved the concept, 'teams of five strive to survive.' I hated it when the WWF tweaked the format in 1992 and started moving away from the elimination matches. Through the years they've done different things with the show but to me, the best events are the ones with those matches.

That being said, I've decided to make today's blog a fantasy booking one where I replace one member of a team to make that unit more strong. Obviously, I'm not going to hit each year or every match but just a few here. Let me know what you think and how you'd change previous Survivor Series teams.

In 1987 there were three glaring omissions to me from Survivor Series. Ted DiBiase, The Ultimate Warrior and the Junkyard Dog. I understand wanting to save DiBiase and have him make a bigger impact. I'll even give it for the Warrior too. However, JYD had been a long time staple in WWF and would have fit well into the show. So no disrespect to Ken Patera, but I'd replace him with the Dog. Patera's second run as a face was lackluster. I believe JYD would have added some charisma to Hulk Hogan's team of Don Muraco, Paul Orndorff and Bam Bam Bigelow.

When 1990's event rolled around, I'd argue the "Macho King" Randy Savage was among the top heels in the company. However, he wasn't even on the card. At least he didn't wrestle. If I remember correctly, he and Queen Sherri cut a promo that night. However, I would have made The Perfect Team more perfect by adding some royalty. Savage, along with Mr. Perfect and Demolition (Ax and Smash with Crush on the outside) would have been a better foursome. I would still use Ax even though he was being phased out and close to leaving. However, he and Smash were the better form of Demolition and one of WWE's most iconic duos.

A year later I would have done some swapping around on the card, not removing anyone. I'm a huge Kerry Von Erich fan and his appearance in 1991 was in a hodgepodge match, teaming with El Matador, Hacksaw Duggan and Sgt. Slaughter. The faces all survived and beat Hercules, Skinner, Col. Mustafa and The Berzerker. I would have put Texas Tornado in a higher profile contest with Roddy Piper, Bret Hart and Davey Boy Smith. That would move Virgil to the team with Duggan and company. 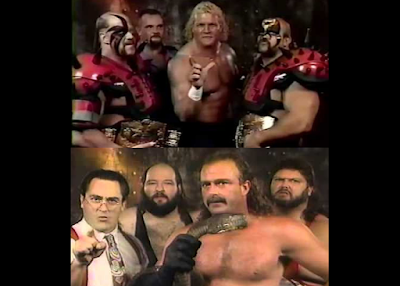 Also in 91, I can't remember why, but for some reason, Sid Justice and Jake "the Snake" Roberts were pulled from their respective teams. Justice was to lead Big Bossman and the Legion of Doom into battle against Jake, IRS and the Natural Disasters. Instead, we got a three-on-three elimination match which actually went on last that night. I guess that was so fans didn't leave upset with Hogan dropping the WWF Championship to the Undertaker. Like I said, I don't remember the reason for the change but it would have been a much better match if the two captains had remained involved.
Shawn Michaels was the last minute replacement for Jerry "the King" Lawler to face the Hart Family in 1993. Lawler's partners were all 'knights' from his roundtable. I get the reasoning for that because it fit the gimmick. However, when Lawler was pulled from the show and HBK put in his place, the knights should have been scrapped too. As cheesy this sounds, they could have kept the 'knights' under masks and just called them Hartbreakers. Remember the team they're facing and Shawn's heartbreak kid gimmick was peaking here.

Posted by Kevin Hunsperger at 3:04 PM