Not surprising, Brock Lesnar retained the Universal Championship and Roman Reigns beat John Cena. Now there is buzz that Cena is retiring. I can't see Cena retiring (pardon the pun) anytime soon. But he will continue to separate himself more as an in-ring performer. I'm cool with that.

As Cena mentioned during Raw Talk, he's 40 years old. He's been going at an elite level for 15 years. The guy deserves a break. When you get older, those breaks become more important, not just for the body but the mind. While watching the match between Cena and Reigns (I knew the result because I watched Monday morning), my respect for Cena grew even more than before.

Too many times fans, sometimes myself included, have referred to the 16 time WWE Champion as Super Cena. It's not meant to be endearing, but a jab at Cena's way of always coming back for the win. However, it's Cena's out of ring persona that is truly worthy of the "super" adjective. I've talked about it before, but his work with Make A Wish, Susan G. Komen and other charitable groups simply cannot be matched. Cena has been the face of the company for more than a decade, and it's a title he's earned and performs well.

For the time being, Roman has the torch in his hands. But Cena isn't ready to let go just yet. I'm sure on Raw tonight we'll get an "I retired the Undertaker and John Cena" promo. It goes well with the story WWE is telling for Roman. I don't mind it. I don't dislike either man involved in this. Fans sometimes forget this is a marathon and not a sprint. 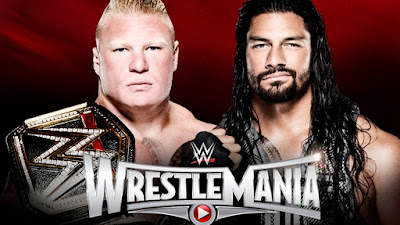 Speaking of which, I'm still on the side that Reigns will reign again as Universal Champion at WrestleMania. The story has been building between him and Lesnar for years. They've both beaten the Undertaker at WrestleMania. They've both beaten John Cena in convincing fashion. Even though I'd rather see Samoa Joe, Braun Strowman or the ultimate longshot, my main man Neville, get a crack as Universal Champion, I'm going to put faith in the storytellers and writers within WWE.

Posted by Kevin Hunsperger at 3:03 PM