Farmer and the Champ

At Hot August Night II, Farmer Billy Hills shocked many fans and his tag team partner JD Wilk after he decked the up and comer. The two had just lost a tag team title match against the champs, Maximum Overdrive. Farmer was clearly frustrated (we hope to hear more from him this Saturday night) and took things out on Wilk. Then the unthinkable happened as Billy and Sarah Summers left the ring with Stride Pro Wrestling heavyweight champion "Big" Roger Matheus.

In July the two big men went head to head for the title in a brutal brawl. Now they find themselves as tag team partners and seemingly as allies. The duo will face Wilk and the number one contender to the championship, Jay Spade. Clearly, Farmer and Matheus will out weigh their competition. Spade and Wilk together weigh in at about 330 pounds. Farmer and Matheus tip the scales at almost 600 pounds. But don't look for Wilk and Spade to hold back.

Wilk was recently on the My 1-2-3 Cents podcast and has the heart of a champion. He and Spade will need to use their aerial skills to mount an attack against their much larger opponents. There is no love lost between either side here. Billy showed us all last month he has a mean streak. I've seen it before with his matches in Cape Championship Wrestling. Join us Saturday night at 6:30 at the Illinois Star Centre Mall in Marion. 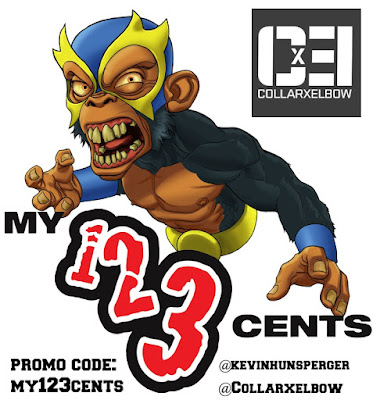 Posted by Kevin Hunsperger at 12:25 PM