Missing from Manias past 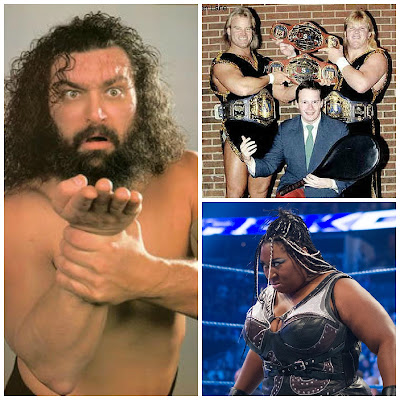 Ric Flair, Sting, The Road Warriors, Dusty Rhodes, Harley Race, Terry & Dory Funk, Jr., Kerry Von Erich and the Steiner Brothers. All guys at one point I would have never imagined wrestling at WrestleMania. But each of these men had at least one appearance on the WWE's biggest event of the year. Here are some others I would have loved to see step on the grandest stage of all.

Bruiser Brody is one of my favorites from childhood. When I first started watching wrestling, I remember him well on Wrestling at the Chase and in World Class Championship Wrestling and eventually the AWA. One of the first live events I attended was main evented by Brody and Ric Flair. Brody won by disqualification. How cool would it have been to see Brody come into the WWF in the early years of WrestleMania?

Although had that happened I could see Brody being built up to the point of getting the title match against Hulk Hogan and then conquered by Hulkamania by the end of the night. That wouldn't have been a bad thing either, but something Brody would not likely have been keen on. Of course in different eras, it would have been great to see Brody vs. Mankind or Brody vs. the Undertaker at a Mania too.

One of my favorite tag teams of all time is the Midnight Express. While I liked Dennis Condry and Bobby Eaton, my pick for this blog is Stan Lane and Eaton, along with manager Jim Cornette. The British Bulldogs, The Hart Foundation and The Rockers would have all been worthy Mania opponents for the Express. Jim Cornette would later appear on WrestleMania events with the men he managed, but fans missed something in not having Eaton and Lane in the WWE. Now that the Rock 'n Roll Express is going into the Hall of Fame, I hope Midnight Express is on the shortlist to be inducted.

Kharma's time in WWE was short, way too short. Her only match (at least official match) came at the 2012 Royal Rumble. She was a part of the 30 Superstar contest. I was there, so I'm grateful for having had the chance to see her in action. But I think a huge opportunity was missed with her. A Beth Phoenix-Kharma match for the Women's Championship would have been amazing. While I don't see the chance ever happening, she'd be a great opponent for any of the women on the roster today as well. I wish thing could have gone differently for Kharma both personally and professionally.

So who never made it to Mania that you would have liked to see on the show? Comment here or on the My 1-2-3 Cents social media pages.
Posted by Kevin Hunsperger at 1:37 PM