Teaming up for Dalton 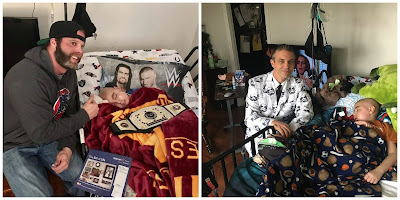 Earlier this month I shared a blog about Dalton Minnick. He's an 11-year-old boy from Evansville, Indiana battling a terminal disease called Adrenoleukodystrophy or ALD. His family is working with the group Granted to make his wish of going to WrestleMania 33 in Orlando come true. Sadly, Dalton will not be able to make the trip in April.

A representative from Granted reached out to me, after learning I am a wrestling fan. She'd also contacted Stride Pro Wrestling champion, Heath Hatton. Together we worked our resources to see what we could do for Dalton. The response has been overwhelming. WWE sent a care package with toys and memorabilia featuring Dalton's two favorite Superstars Dean Ambrose and Roman Reigns. Others in the wrestling business responded by sending DVDs and action figures.

Heath visited with Dalton last week. Today I made the trip to Evansville and spent a little time with Dalton's family and drop off the items I'd received. They were more than grateful for the gesture. Since Dalton is a big Star Wars fan too, I wore my new Stormtrooper suit. He was sleeping while I was there, but I could sense he knew there were people there visiting him. His eyes fluttered a few times as we talked about WWE and his time at a house show earlier this year. 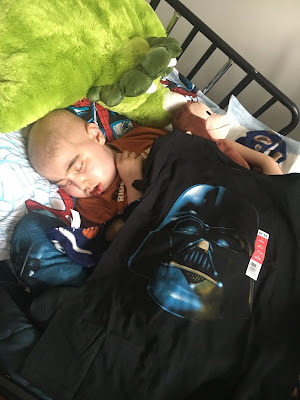 I'm still receiving messages from people asking how they can help.  And I still anticipate receiving items from the initial post. If you want to help I would suggest donating to the family's GoFundMe page, it would be more than appreciated. Email me kevinhunsperger@gmail.com or contact the Granted office at (812) 425-9474 if you have any other questions.

Thanks to those who have given. Visiting with Dalton and his family has been a wake-up call to not take anything for granted. Lives can change in the blink of an eye. Hug your kids a little tighter tonight, because I know I will.

Posted by Kevin Hunsperger at 2:09 PM