My 3 best wipeouts on the slopes 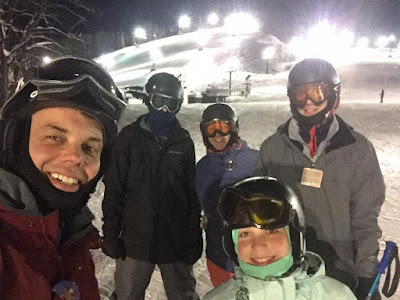 Our ski trip to Crystal Mountain in northern Michigan has come to a close. I was apprehensive about skiing because I've never done it before. While I didn't think I'd meet my demise like Sonny Bono, I did have visions of breaking a bone or two. As expected I had some pretty gnarly wipeouts. Here are the three most memorable, unfortunately, I don't have pics or videos.

On our last night, I was coming down the hill and heading to the lifts. I glanced over and saw a beautifully lit Christmas tree. I thought to myself what a great family photo it would make and possibly our 2016 Christmas card. As I pictured my family standing in front of that tree, I must have hit a patch of ice or something because I wiped out, tumbling to the ground as both skis left my feet. 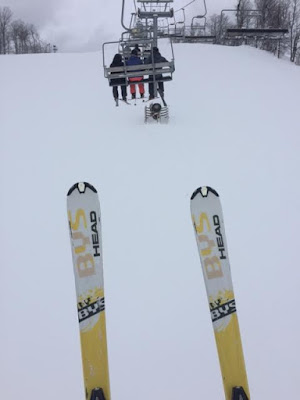 Also on the last day, as my wife, daughter and I prepared to take a break for lunch, we all skied down a small incline to the parking lot where we'd pop off our skis. My daughter hit a rough spot and went down right in front of me. I had no choice but to crash into her. I thought I'd hurt her, but luckily she was fine. We both lost our skis in that incident too.

And the most painful (both to my body and ego) happened on day one. It was probably our third or fourth run on the ski lift and as the gate opened, I thought I could get through, but got stuck. I tried to beat the lift but ended up getting flattened by it. I landed elbow first on the conveyor belt. My pain quickly became a second thought as I saw the next chair coming my way. The attendant stopped the lift in plenty of time and I was able to get back on my feet. As far as I could tell only my family had been laughing at me. 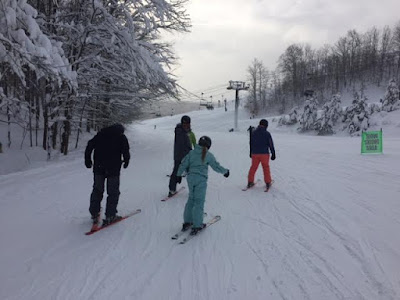 Skiing was a lot of fun. But as I sit here writing this blog my neck, wrist and ankles are in pain. I know it'll pass soon enough. We made great memories and I'm sure we'll be hitting the slopes again in the future.
Posted by Kevin Hunsperger at 7:49 AM