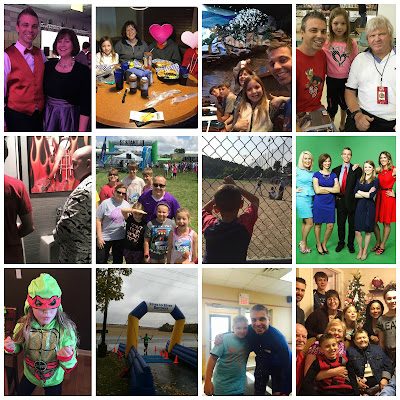 By Kevin Hunsperger
@kevinhunsperger & @my123cents on TwitterListen to the podcast

A quick year in review of my favorite pics (most of them I took or am in, sorry).  Overall it was a good year.  Hoping 2016 is even better though.  Thanks again for reading the blog, listening to the podcast and watching the YouTube channel.


Oh What a Night

In January I once again had the pleasure of being a part of the Hospice of Southern Illinois Red Carpet Gala.  I'm so happy my wife was able to attend this year too.  I was a part of the "Jersey Boys" and we were the closing number.  It was a lot of fun for everyone involved.


We Heart You
Valentine's Day 2015 was spent as a family at a restaurant here in southern Illinois called Grumpy's.  The name is fitting as the two teenagers were grumpy about having their photo taken so I added hearts to keep the spirit of the holiday alive.

Give Me a Break

For the first time ever, we decided to take a quick trip over Spring Break.  We surprised the kids and got in the van Saturday morning bound for Pigeon Forge, Tennessee.  This shot is from dinner at the Dixie Stampede. They don't allow photography during the show, so this was a pre-dinner selfie.  As you can see the boys aren't impressed with being photographed.

In April I took my podcast, My 1-2-3 Cents, on the road and met the legendary "Beautiful" Bobby Eaton.  He's one half of the Midnight Express.  Bobby was at the Cape ComiCon event in Cape Girardeau.  He was gracious enough to spend some time doing an interview with me and he met my daughter Brooke too.  I'm already looking forward to 2016's event.

I Mustache What You're Looking At

My buddy Tom Harness is one of a kind.  He runs a successful business, Harness Digital Marketing, is a loving husband and father, a veteran and dedicated to making the community a better place (not all in that order though).  The mustache suit came about to promote HerrinFesta Italian.  He and I did this silly pose at S&B Burger Joint.

Insane in the Membrane

I've been running for the last few years.  I like to get the family involved in the process and in June we found a race in Evansville called The Insane Inflatable 5K.  My crew was joined by one of my oldest (in age and longevity) friends, Kevin and his family.  After the race in Evansville, we spent the night and next day in Santa Claus, Indiana and hung out at Holiday World.  It was a blast.

In July my nephew and niece visited us from Texas for about a week. I snapped this picture of my then 5 year old nephew Chace watching his cousin at bat.  He was so excited to see Mason play ball.  We ended the evening at Chuck E. Cheese were more fun times unfolded.

WSIL added a weekend morning news cast over the summer.  Once all the players were in place it was time to do a photo shoot.  This is my favorite shot from that day.  Some viewers went so far as to add backgrounds to the green screen.  Watch Monday through Friday 5 a.m. - 7 a.m. and Saturday & Sunday from 6 a.m. to 7 a.m.

Hero in a Half Shell
My daughter has embraced her inner nerd, professing her love for Teenage Mutant Ninja Turtles.  This year for her birthday, a friend got her this hoodie.  She also has earrings, a tee-shirt and footie pjs that portray the heroes.

It's hard to tell in that pic, but that's me crossing the finish line at my first marathon.  Never in my life did I imagine I'd complete a full marathon.  It was such an incredible experience.  My wife, Lisa, played a huge role in keeping me motivated that day.  You can read about it here.

Make New Friends...
Earlier in the school year I got a message from a viewer telling me her son had picked me as "the celebrity I most want to meet."  Since they're a local family this would be no problem.  After months of scheduling, I was able to finally meet Nate and his mom for lunch on a Friday afternoon.  We had Subway and spent some time chatting about life.  He's a great kid and I'm beyond flattered he wanted to meet me.

For the first time in years, my brother and his family and my family were able to be under one roof on Christmas Day.  It was great to spend time together and since I took off work the week after Christmas it was even nicer not having to rush back to southern Illinois on Christmas night.

Posted by Kevin Hunsperger at 5:15 PM