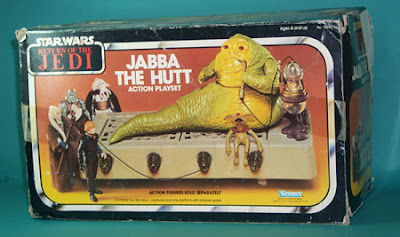 Growing up in the 80's lead to a Star Wars obsession for me.  I was four when New Hope came out.  By the time Return of the Jedi hit theaters, I was all in with my fandom.  I had been collecting the action figures along the way and the bigger toys that came along too. 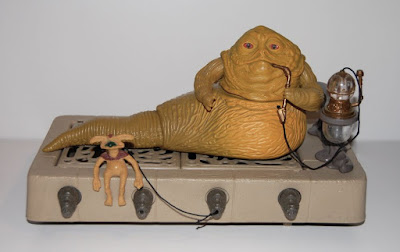 I can remember some of those big ticket items that were under the Christmas tree.  While I loved all the Star Wars toys I had, three in particular bring back fond memories.  Jabba the Hut is one of my favorite characters, so it goes without saying when I added his playset to the collection it was a good day.  Jabba came perched on his stand that you could flip open with the turn of a nob on front of the toy.  I'm sure there's an official name for these features, but I'm writing this from memory.  It also included the annoying little sidekick Salacious B. Crumb and the hookah device Jabba used.  I paired the set with the Rancor. 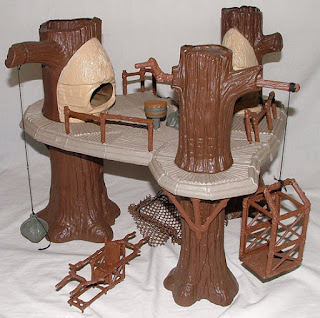 The Ewok Village was another favorite.  This too was from the Jedi collection of toys.  It included all kinds of features like a net to drop down on intruders, a built in slide and a hand operated elevator.  This was a pretty large and elaborate toy that I spent hours on end playing with as a kid, along with all the Ewoks. 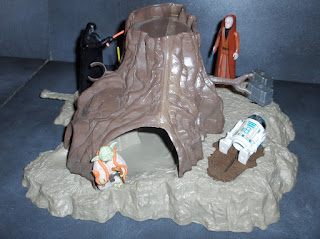 I also had an amazing time with the Dagobah playset.  That was Yoda's home we first saw in Empire Strikes Back. The thing I remember most about this was the spongy area that served as quicksand, just like in the movie.  You could push an action figure through it sending them to their death.  There was also an area for setting up "duels" between action figures.

There were a ton of Star Wars toys that came through our house in the early 80's.  I held on to them all for decades, until in 2006 I decided to sell the collection in an effort to feed my Wrestlemania habit.  While I miss those toys, I'll always have the memories from a galaxy far, far away.

Posted by Kevin Hunsperger at 2:37 PM