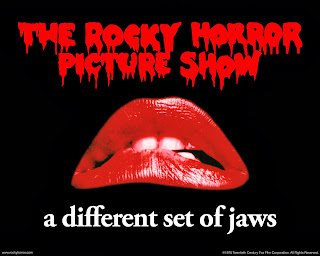 The Rocky Horror Picture Show was released in 1975.  I was only two years old.  I had heard about it in my teens years, but had no real desire to see it.  In fact, I thought people who did go to watch it were "weird."  Gotta love the way the teenage brain works.  Then during the summer of 1990, I met a group of great people while away at camp.  When we all returned to St. Louis later that summer, we got together to see a midnight screening of this cult classic at the Tivoli Theater.

I had no idea what to expect.  If you've never seen the movie "live" I highly recommend the experience.  The crowd is always enthusiastic and helps make the night even more memorable.  People threw toast, toilet paper, and other items throughout the 90 minutes of the film.  They sing out loud and replace lines in the movie with sometimes vulgar words.  It's great!  I couldn't believe what I was seeing on screen and in the audience.

Long story short if you've never seen RHPS, a young couple named Brad and Janet get stranded at the mansion of a transvestite named Frank N. Furter, who is from the Transsexual Transylvania.  He's creating the perfect man, named Rocky, only to be draw the ire of his employees (and possible lovers?) Riff Raff and Magenta.  There's lots of sex and murder and general mayhem throughout.  Meatloaf, Tim Curry, and a young Susan Sarandon are part of this wild cast.  It's one of the most bizarre movies I've ever seen, and my Cliff's Notes version does it no justice at all.

After seeing the movie that summer before my senior year of high school, I became obsessed with it.  I bought the cassette tape of the soundtrack and did the Time Warp at home every time I had the chance. I learned it well enough to do it in the green room prior to our drama club plays and not feel like a fool doing it.  A year later when I finally got a CD player, one of the first CDs I got was the four piece 15th anniversary collector's edition.  It included the movie soundtrack, the London theatrical soundtrack, an international soundtrack, and Songs from the Vaults.  A friend of mine also made me a copy of an audience participation cassette tape, which is great.  It's the entire movie with the sounds of the people watching the film at the theater.

I think most college campuses offer or at least offered a screening of the film around Halloween.  I'd go with a group of friends each year and sing and dance and toss things at the screen, just like I did years earlier at the Tivoli.  That was 20 plus years ago, but I still remember it so well.  I will listen to the music on my iPod now and think back to a time when I could time warp with the best of them.  I can't explain why I enjoy it so much, it's just one of those quirky things about me you can add to the list.  I still want to find a copy of the sequel, Shock Treatment.  That will happen one of these day.