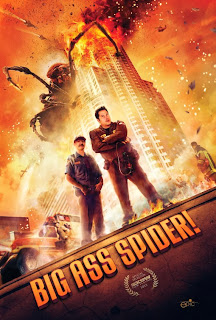 As I wrote about a few months ago, thanks to Movie Pass, I have seen more movies this year in the theater than ever before. I will see just about anything. Earlier this week when I was looking at the schedules for the local theaters, I saw a movie I wasn’t familiar with was playing at one of the Independent theaters, which has become one of my favorites. I knew nothing about the movie besides the title: Big Ass Spider. Now, if one of my friends had asked me if I wanted to see a movie called Big Ass Spider, the first words out of my mouth would have been, when and where?  There really are no other words needed in that situation.

Big Ass Spider only had one showing for the night so there was no debate needed to decide when to see the movie. I got to the theater around 9:40 for the 9:55 screening. Took my seat and was surprised at the turnout. Normally when I go see an Indie film few people probably know about, there are only maybe 1-5 other people in the theater. Outside of a premiere screening of Free Samples and a screening of “The Package which included a post movie Q&A with “Stone Cold” Steve Austin, the audience for Big Ass Spider was the biggest I’ve seen.

The title pretty much tells you all you need to know about the movie. There is literally a Big Ass Spider on the loose in Los Angeles. An Army squadron led by Ray Wise, is trying to exterminate the spider, but it’s professional exterminator Alex Mathis (played by Greg Grunberg) who can predict where the spider will go next because Alex knows how to think like a spider. Along with his sidekick Jose,  the “Hispanic Robin,” it’s up to Alex to save Los Angeles before the spider can lay her eggs and unleash total havoc on the city of angels.

While one can look at the title and watch the trailer for Big Ass Spider and think it’s perfect fodder for Twitter jokes like SyFy’s recent hit Sharknado, Big Ass Spider actually shows a competent, genuinely entertaining movie about abnormal animal behavior can be made. 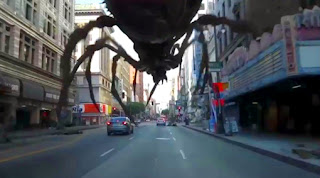 I was pleasantly surprised how much I enjoyed the first half of Big Ass Spider. It had well crafted suspense when Alex was hunting for the spider in the basement of a hospital and the comedic relief was actually funny without relying on lowbrow humor.  Once the spider grew into Big Ass size, the movie was hindered by some cheesy looking special effects and noticeable green-screen shots. However, Greg Grunberg and Lombardo Boyar made such a good team that one can easily overlook any shortcomings the film may have and simply enjoy the ride.

Posted by Kevin Hunsperger at 9:14 AM