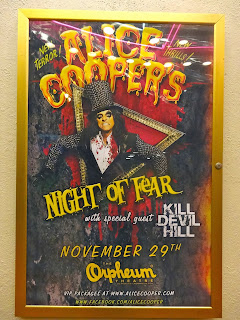 Back in 1986, I had an after school paper route. I would get home from school, grab the bundle of papers, go inside and roll them up getting them ready for delivery. While I prepared the papers, I would have the TV on usually with M TV playing in the background. This was back when M TV actually showed music videos during the day. I don’t remember the exact day, I’m guessing it was sometime in September or October, that M TV introduced me to a musical icon who would become one of my favorite artists and whose albums I continue to buy and concerts I still attend to this day.

That fateful afternoon as I sat in front of the television rolling newspaper and video came on that was theme song for ‘Friday the 13th Part 6: Jason Lives.” Being a huge Friday the 13th fan at the time, I was in entranced by this song I had never heard. The song was ‘He’s Back (The Man Behind the Mask)’ by Alice Cooper. I did not know of Alice’s history so I wasn’t aware he was the original shock rocker. All I knew was this was one of the greatest songs I’d ever heard and I needed to hear more. 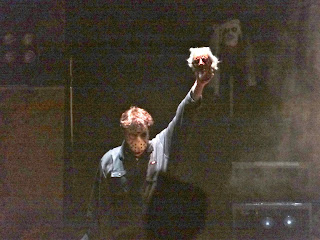 Within the month I had joined the Columbia Records tape of the month club (there’s a blast from the past) and one of my introductory selections was the Constrictor cassette that included ‘He’s Back.’  I think that cassette lived in my Walkman for the next few months.

Over the next two years, I started learning more about Alice Cooper and getting into his back catalog of music. His albums, ‘Love it to Death,’ ‘Welcome to My Nightmare,’ ‘Goes to Hell’ and ‘From the Inside’ still hold up really well 35 years later. Wow! Until I wrote that, I hadn’t really thought about how old those albums are. 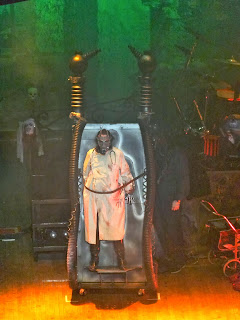 As a horror movie fan, one of the appeals of Alice Cooper was his stage show. The first concert of his I saw on video was The Nightmare Returns Tour. This was the tour in support of ‘Constrictor.” Watching the various characters (including Jason Vorhees) roam the stage and seeing Alice shove a microphone stand through the stomach of an unsuspecting cameraman who got too close to the singer was something I had never seen before. If I wasn’t hooked by the music before, the show captivated my attention.

Another event that helped solidify my fandom of Alice was Wrestlemania 3. I had been watching wrestling for about four years at this time and had watched the first Wrestlemania live on closed-circuit television. While most wrestling fans were excited for the Hulk Hogan vs. Andre the Giant main event, I was excited for an undercard match. The Honky Tonk Man was going up against Jake “The Snake" Roberts. To offset the distraction of Honky’s manager Jimmy Hart at ringside, Jake had Alice Cooper as his corner man. The pairing made sense. Wrestlemania 3 was being held in Detroit, Alice’s hometown. Jake was known for bringing a python to the ring with him and Alice was famous for bringing a snake out on stage during his shows. 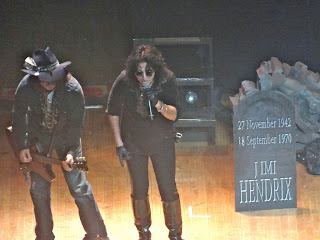 Over the past 27 years, I’ve had the opportunity to see Alice in concert eight times in four different states. The most interesting show was the show last year. During the last third of the show, actor Johnny Depp joined the band on stage and played guitar. Over the course of these shows, I’ve seen Alice electrocuted, bound by a straight jacket and decapitated only to rise from the dead and try to rally the audience to vote for Alice in the next election while former “Presidents” dance on stage.

If you’ve never seen an Alice Cooper performance, I highly recommend you check some out on YouTube, or if he’s playing near you go to the show.  Unlike a lot of today’s artists who use shock as a way to distract from the music, Alice’s shows using theatrics to enhance the song and tell a story. I’m still waiting for the Alice Cooper play to hit Broadway.

Posted by Kevin Hunsperger at 1:30 PM