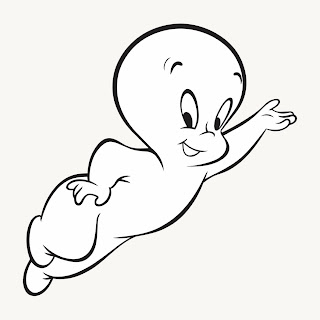 Growing up, one of my favorite cartoons to watch was Casper the Friendly Ghost.  Sure, it was hokey, but it was good wholesome fun for kids.  The cartoon carried a valuable message: don't judge a book by its cover.

We've always been taught that ghosts are scary.  Casper tried to break that stereotype.  He did good deeds everyday.  Casper helped lost puppies find their way home.  He stood up for kids who were being bullied.  He was exactly what we needed in as a role model.

In the mid 90's, Hollywood came up with a film version of Casper.  I'm not going to lie, I never saw it, so I can't comment on how it was, but I believe there have been several direct to video sequels made, so I'd imagine there was some success.

None-the-less, 80 years later (he started off in the comics) Casper can still be find on cable channels spreading his lessons of kindness, love, and friendship.  You can't go wrong with that.