By now you know that Floyd 'Money' Mayweather won his fiftieth  and final fight against Conor McGregor Saturday night. I've loosely been following the buildup to the match, mostly because of Mayweather's one-time association with WWE. Chad and I were in the crowd the night he beat the Big Show at WrestleMania 24. After hearing about the deal he brokered it inspired me to write this blog.


Now that he's retired from the boxing aspect of his life, Mayweather had already filed for five trademarks related to 50-0. It's a genius move to keep making money on an already impressive career. Five and a half years ago I started a wrestling win streak by winning my first match in All-American Pro Wrestling. That record stands to this day. So should I resume my in ring career and try branding myself like Mayweather? Would fans buy into a 1-0 line of merchandise?


Of course, I'm not being serious as I write this. I just wanted to recognize the efforts by Mayweather and his team. It's all about marketing and hype. Yes, skills in the ring brought the original attention, but he was able to capitalize on that and become a very, very, very rich man in the process. 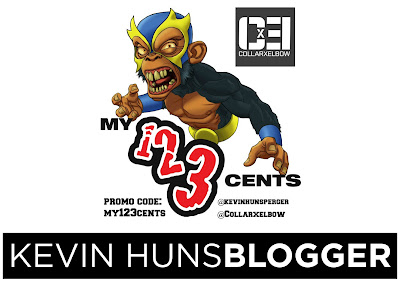 My hope one day is to grow the My 1-2-3 Cents brand as well as Kevin Hunsblogger. It's a slow process, but I'm enjoying the journey. I've also added the COLLARxELBOW brand to my efforts. Shop online for merchandise and use the promo code MY123CENTS to save money. Thanks for the support.
Posted by Kevin Hunsperger at 10:27 AM