I know wrestlers on the PWI 500

I still remember buying my first pro wrestling magazine. I was 11 years old. It was the December 1984 issue of Pro Wrestling Illustrated. Barry Windham was on the cover and my favorite wrestler at the time, Kerry Von Erich was the poster inside. I bought every issue of the magazine from that time until the end of 1995, when the internet and Rec Sports Pro Wrestling (and my lack of space) took over. One of my favorite issues became the annual PWI Top 500.

The first issue came out my freshman year in college. Hulk Hogan stood on top of the rankings in 1991. It made sense. He had a solid year, regaining the WWF Championship and defending the honor of America against the Iraqi-sympathizer Sgt. Slaughter. The unique thing about the Top 500 though was getting to learn more about wrestlers I'd never heard of before.

Now, some 27 editions later, I'm finding that I now know (like in person) some of the wrestlers who have made the list. I haven't seen everyone on the 2017 list, but I do know Brandon "Espy" Espinosa has once again been ranked. I met Espy during our days with All American Pro Wrestling. He was quite a talent then and has only continued to excel in the years that have passed. He has traded the Missouri Wrestling Revival Championship with his former partner in AAPW, Ace Hawkins this year and continues to wrestle around the country. In 2016 he did a show with Stride Pro Wrestling as well.

"Golden Boy" Greg Anthony has graced the PWI 500 list too. I also met Golden Boy in AAPW, where he wrestled everyone from Heath Hatton to The Mississippi Madman. He's recovering from a recent heart procedure but has been an established member of the NWA: Midsouth roster for years now.

Matt Cross, who first came to prominence on Tough Enough several years ago, also wrestled a couple of times for AAPW. He too has been on the PWI Top 500. He continues to rise on the indy scene and is one of the top guys in Lucha Underground right now. 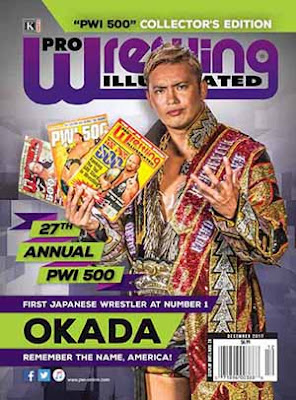 As I mentioned, I haven't seen the complete list for 2017, if I missed someone on this year's list that I do know, I apologize. Congrats to Okada for being the first Japanese wrestler to top the list and to everyone else who made the cut. Check out the standings right here.

Posted by Kevin Hunsperger at 2:30 PM