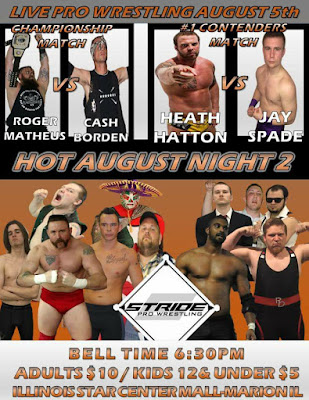 The men and women of Stride Pro Wrestling hit the ring for Hot Summer Night 2. The action is happening at the Illinois Star Centre Mall in Marion, Illinois. It's a short drive from southeast Missouri, western Kentucky and southwestern Indiana.

Seven matches have been announced, including three championships on the line. "Big" Roger Matheus, Tony Flood and Maximum Overdrive are all set to defend their titles. Here's a look at the card.

Legacy Championship Match
Tony Flood (c) vs. an opponent to be named by Sam Hunter

Posted by Kevin Hunsperger at 1:41 PM