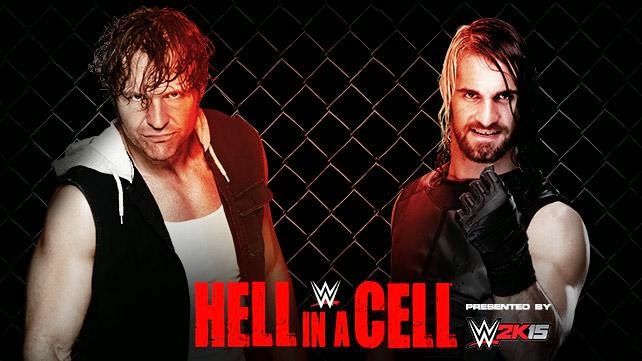 Tonight, I’ll watch my third live Hell In a Cell match, having seen Triple H and the Undertaker at Wrestlemania 28 and the inaugural match between Shawn Michaels and The Undertaker 17 years ago at In Your House: Bad Blood. At that event, the WWE Universe (then known simply as fans) saw the debut of The Undertaker’s presumed dead baby brother, Kane. Yes, Kane has been on the active roster for 17 years. My math may be a bit off, but I believe Kane has been on the roster a year or two shorter than Hulk Hogan and Steve Austin were active WW(F)E wrestlers combined.

This year’s Hell In A Cell show features two HIAC matches. The first, Seth Rollins vs. Dean Ambrose actually makes sense to be inside the demonic structure as Dean is seeking revenge for Seth destroying their stable, The Shield, and for putting Dean’s head through a cinderblock.  The second HIAC match, I would personally classify as personal hell taking place in a cell. John Cena battles Randy Orton in match where the winner gets a title shot against Brock Lesnar. If there is any match in WWE that I never care to see in any manner it’s Cena/Orton. They have fought too many times for the match to have any interest. Not only is the match up stale, the number one contender stipulation seems like a tacked on afterthought to put some meaning to the match. Given the way the story has played out over the last month this would be like the Oakland A’s playing the Pittsburgh Pirates in the 2014 World Series.

Outside of the two HIAC matches, the show also features the Usos vs. the DustBrothers, a rematch from last month’s Night of Champions as well as Paige vs. AJ Lee who have fought each other on the last two pay per views. Last month Dolph Ziggler faced The Miz for the Intercontinental title and Sheamus fought Cesaro for the United States title. At HIAC, I-C champion Ziggler will square off with Cesaro while Sheamus will defend his title against The Miz. If these four matches don’t show the lack of creative direction in WWE at the moment, I don’t know what does.

The other two matches announced for the show include the Bulgarian Brute, Rusev looking to add the Big Show to his list of conquered Americans and The Bella twins continue their "gone on too long feud" with the stipulation of whoever loses has to be the other’s personal assistant. Hell In A Cell as a whole looks like the poster child for The WWE Universe’s fear that once shows became available on the WWE Network for just $9.99 a month there would be little effort to separate the shows from Raw or Smackdown.

Having no inner workings of how WWE creative operates, I don’t know what’s going on with the booking plans for shows. I do know that I’ve watched maybe one episode of RAW from start to finish in the last three months. I don’t feel I’ve missed anything. Every week the same people interact with each other to the point where no match at HIAC seems exciting or new.

Where are Kofi Kingston, Xavier Woods, Big E, Fandango and the Wyatt Family? The WWE roster is pretty stacked at the moment yet the creative team seems to only be able to focus on a group of about 15 wrestlers at a time. With RAW being three hours long, along with Smackdown, Main Event and Superstars, there are no reasons why every show needs to feature all the pay per view (or are they monthly specials now) story lines.  If Dean Ambrose and Seth Rollins had only interacted twice on the build to HIAC would it have diminished the anticipation of their match?

I am of the opinion that having guys interact and fight on every show leading up to the pay per view reduces the excitement of the match. Maybe it’s the old school fan in me who misses the day of squash matches and short, to the point promos where one wrestler vowed to get revenge/prove superiority/accept a challenge of their opponent. Whatever the case, today’s shows all seem to blend together with no real importance attached to any match.

Will the show exceed my expectations? Hopefully. Will I sit there unimpressed while fans less cynical surround me and go crazy when John Cena’s theme music hits or when The Usos says "Ooh"? Most likely.  I’m sure the show will be decent. It’s just not the show I would have booked if I were in charge. As Owen Hart used to say, “enough is enough. It’s time for a change.”
Posted by Kevin Hunsperger at 12:10 PM