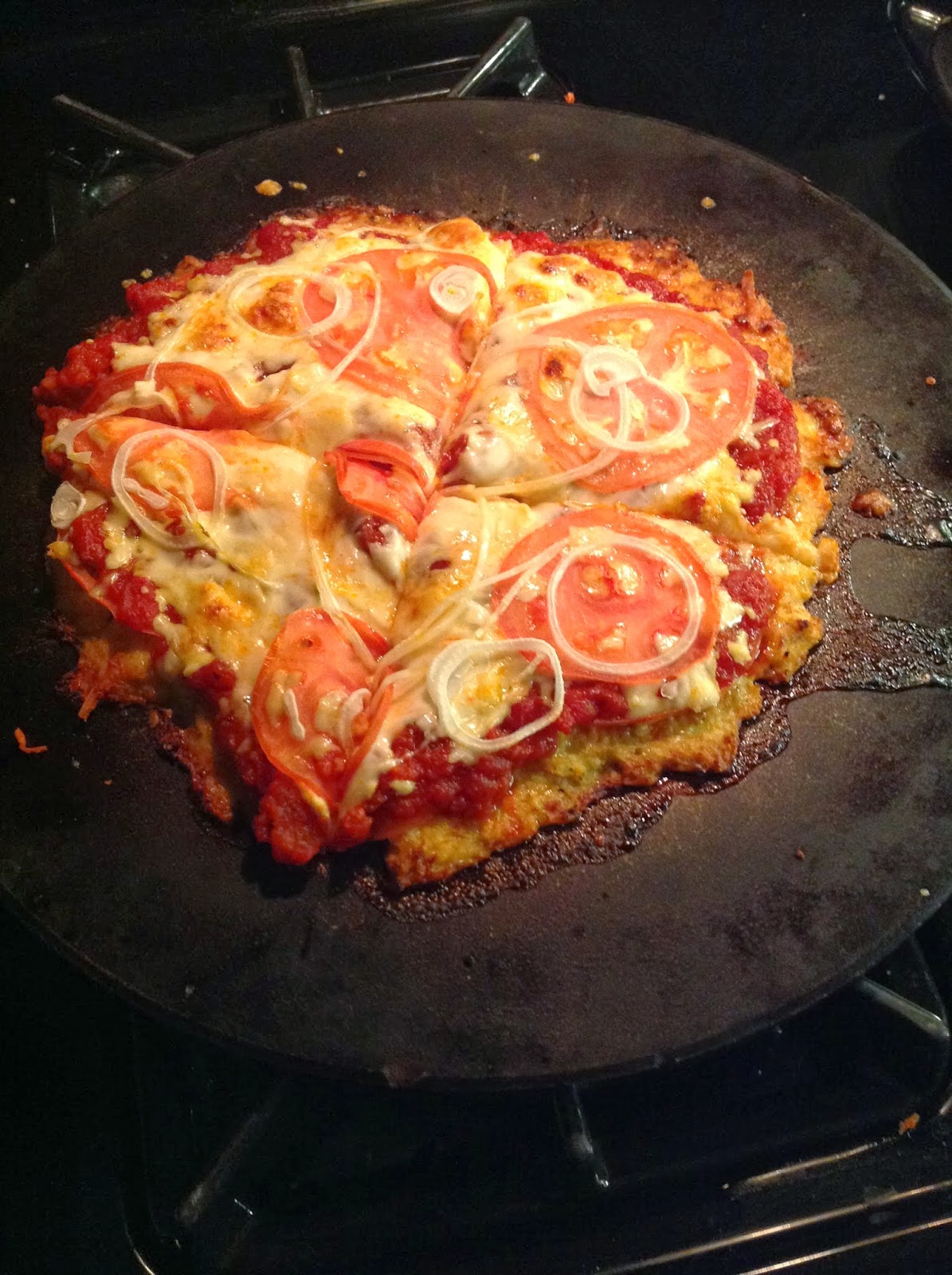 I have declared 2014 "Operation Find My Abs", and learned  a long time ago that just working out isn't going to get the job done.  News flash: the Ab Roller did not work for me.  One thing I have discovered though is the first place to start if you want to show off your abs is in the kitchen.

So far this year (I know it's only 10 days into the New Year) I have drastically cut back on my sugar intake.  I no longer add it to my morning coffee, and I've cut back to only having soda on Friday and Saturday.  I know I need to cut it completely, but I am drinking diet.  Yes, that's just as bad I know, but I am addicted to it.

My wife and I are eating healthier and cleaner too.  It requires some extra prep and patience, but I think it's going to be worth it not just to look better, but to feel better too.  So I wanted to share with you a recipe we had the other night.  Despite the title, it was really good.  My kids, who do not know I used cauliflower for the crust, even liked it.  Oh, and this is not my own creation.  I found it on the website RecipeGirl.  Her recipe is for Hawaiian pizza, but we just opted for tomatoes and onions.

This recipe should give you enough crust to make two small pizzas.  It was enough for the five of us to eat, but keep in mind none of us planned to pig out.  We each had a couple of pieces.

Preheat the oven to 450 degrees.  Then use a cheese grater or food processor to reduce your cauliflower into tiny pieces.  Once that's finished microwave it for 12 minutes.  The original recipe called for 8 minutes, but I increased the time because I made two crusts.  You want the cauliflower to get soft.  Once it's finished in the microwave allow it to cool.  I stuck the bowl in the fridge for about 15 minutes.

Add the eggs, cheese, oregano, and garlic to the cauliflower and mix well.  Then place on a cookie sheet or pizza pan. We have stoneware and don't spray it, but you may want to do that first.  Flatten the "dough" into the thickness you prefer for a pizza crust.  I did this by hand as it stuck to the rolling pin we have.

Bake the crust for 15 minutes.  Remove it from the oven and add the toppings you like.  Turn on the broiler in the meantime.  Return it for about 3 or 4 minutes or until the added cheese melts and bubbles.

Remove from the oven and cut into slices.  I did notice this is better to eat with a fork, as the crust isn't as strong or dry as a traditional pizza crust.  But like I said, it was really good and the kids had no idea it was made with cauliflower.  I just hope they don't read this.

CRUST:
1 large head of cauliflower
2 large eggs
2 cups of shredded mozzarella cheese
2 teaspoons of dried oregano
2 garlic cloves (or 1 teaspoon of dried, minced garlic)
1 teaspoon of onion salt (I did not use this, I don't add salt to recipes usually)

For the toppings, my wife and I used Lucini Rustic Tomato Basil Sauce.  It's a healthier option with fewer calories and no added sugar. Because we were almost out of it, we just used a can of Chef Boyardee Pizza sauce on the kids version.

Posted by Kevin Hunsperger at 1:42 PM