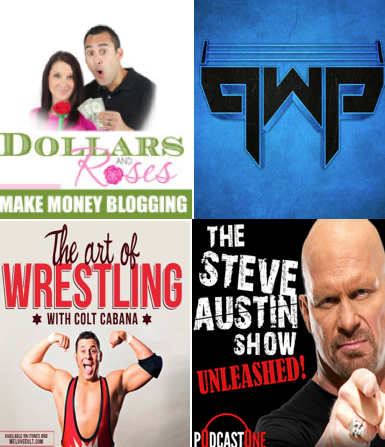 Like my reading preferences, I tend to listen to a lot of wrestling podcasts.  Since I've revamped my running and am hitting the trail for longer periods of time, listening to a podcast makes the time go by so much quicker.  In my opinion it's better than music.  When I have a chance to drive my wife's car, I can plug in my phone and listen through the radio.  It makes road trips (on my own) so much better.  So here are the shows I listen to, but note, they're not all wrestling related.

Dollars & Roses: Make Money Blogging: The hosts of this podcast are my friends, Jeff and Mandy Rose.  In fact, Jeff is the one responsible for the creation of My 1-2-3 Cents.  As an avid blogger, Jeff encouraged me to try a wrestling blog almost four years ago.  So it's only natural I continue to follow his advice.  Jeff and Mandy know what they're talking about and provide transparency each month with their financial reports.  They've shown time and time again you can be successful at blogging, you just have to work hard at it.

I want this blog to be successful and make money.  I'll be honest, I have made some cash, but nothing near what others are making.  After listening to a couple of their shows over the weekend, I'm going to be tweaking and making some changes to the current page.  My plan is to start making those changes in the next couple of weeks.  Some the ideas are simple, while others are a bit more complex.  But I'm fortunate to have friends like Jeff and Mandy, who are both successful bloggers and now podcasters.  If you've wanted to start your own blog or if you want to improve the one you have, check them out at Dollars & Roses.  Even after Mandy's recent blog about her first wrestling show, I still consider her a friend. 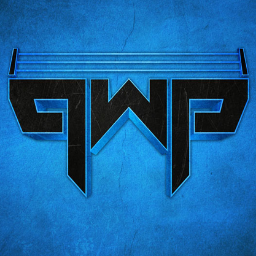 Pro Wrestling Ponderings:  I'll admit, I don't get to listen to the PW Ponderings crew as often as I'd like to.  I met Jerome Cusson, one of the founders of the site, two years ago when he was covering All American Pro Wrestling's Main Event here in southern Illinois.  Jerome and his team work hard covering the very best of independent wrestling.  If you're a fan of wrestling and want to explore what's going on on the indy level, I highly recommend visiting PW Ponderings and checking out the articles.  But listen to the interviews too.  They talk to some of the best and brightest on the local scene and who knows, one day that guest may be the next big thing in the WWE.  Jerome and I also did commentary briefly for Pro Wrestling Collision. 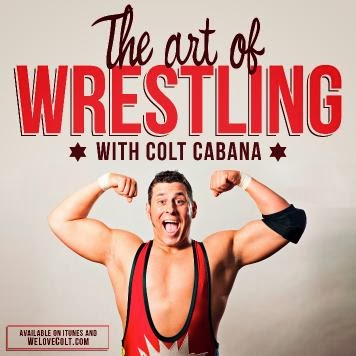 The Art of Wrestling with Colt Cabana:  I don't know this for sure, but I believe Colt Cabana revolutionized the whole podcast concept, especially for the world of wrestling.  For those who don't know him, Colt is an indy wrestler, who spent a brief period of time in the WWE as Scotty Goldman.  He's also CM Punk's best friend, and the WWE Superstar has dropped Colt's name more than once on WWE programming.  Colt's show is great because he talks wrestling and life with his friends in the business.  It gives listeners a chance to hear the voices of many talents they might not normally hear from.  But Colt recently landed a pretty big interview when he talked with WWE Hall of Famer, The Living Legend Bruno Sammartino.

Colt takes a comedic approach most of the time, but the conversation does not just revolve around wrestling.  Listeners get a chance to learn about the men and women Colt is interviewing beyond their love of spandex and baby oil.  The other thing I like about Colt (and I'm going to name drop and tell you I've met him on more than one occasion), is that he's running the show and his marketing, bookings, and merchandise sales all from his studio... apartment. (Listen to the show and that will make more sense)  Check out his website here. 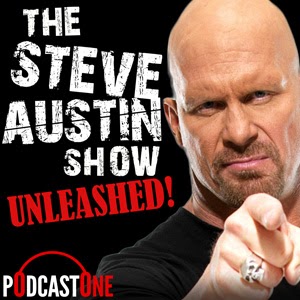 The Steve Austin Show: Unleashed:  If you're a fan of the Rattle Snake's, you really should take the time to listen to Austin's podcast.  His shows drop twice a week, and have included plenty of memorable WWE Hall of Famers and Legends like Ric Flair, Jerry Lawler, Bret Hart, and Jim Cornette.  The stories are great, and many times, Austin will break up the interview into two-one hour shows.  Just like I enjoy hearing about the lives of indy wrestlers and how they're doing, I also love hearing the stories of stars from my childhood recount their time in the business and offer advice for the next generation.

So those are my four picks, those are the podcasts I primarily listen to.  Another show I plan to start listening to is Talk is Jericho with wrestling great, Chris Jericho.  Now that I'm caught up with most of my other shows, I'll start listening.  One of my goals for 2014, is to figure out how the whole thing works and start one of my own.
Posted by Kevin Hunsperger at 4:38 PM