This week is a significant one for title changes through the years in wrestling.  The Royal Rumble hitting this time of year plays a big factor in those stats.  This week also marks the 29 year anniversary of Hulk Hogan winning the WWF title from the Iron Sheik.  I've blogged about the significance of that moment before, so I'm going to write about another big title change from back in the day.  At least it was a big deal to 11 year old Kevin.

It was January 21, 1985.  Even though I'd been watching wrestling for about a year, I still considered myself new to the sport, especially the WWF.  My favorite tag team at the time was the up and comers of Barry Windham and Mike Rotundo.  The two were dubbed "The U.S. Express" and were quickly making a name for themselves among the other tag teams.

I remember watching in almost shock when the duo beat tag team champions Dick Murdoch and Adrian Adonis.  This was the era of no Internet, so I had no clue the title change was about to take place.  I remember seeing the match on Tuesday Night Titans (I think it was TNT, as Prime Time Wrestling wasn't around yet)  As a kid and a huge mark for the baby faces, I was satisfied with the new tag champs. 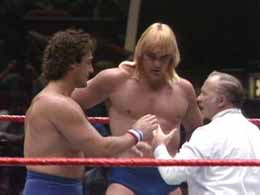 Windham and Rotundo had added Capt. Lou Albano as their manager at some point too. This helped the champs as they geared up for their high profile defense against the Iron Sheik and Nikoali Volkoff at Wrestlemania.  Despite Albano's presecence, the champs lost their belts after Windham was nailed by Freddie Blassie's cane.  Again, this loss came as a huge surprise to me, as it was probably the biggest upset of the night (at least in my pre-teen mind).

It didn't take long for the U.S. Express to get on track again and regain their gold.  They held the titles for most of the summer before dropping them to the unlikely duo of Brutus Beefcake and Greg Valentine.  This time it was Johnny V's cigar that cost the champs the belts.  Windham and Rotundo split a short time later and Windham headed back to the NWA.  Their partnership was brief, but memorable to me.  I had always hoped LJN would release them in action figure form, but it never happened...

Posted by Kevin Hunsperger at 1:16 PM