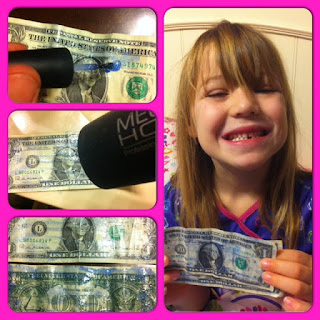 Sorry wrestling fans, this isn't a post about the Rock's movie "The Tooth Fairy."  Today I'm writing about the real Tooth Fairy's visit to our house.  Our youngest, Brooke, lost her first tooth recently.  It made me realize, this is the final time my wife and I will be going through the Tooth Fairy routine.  I wanted to make this special for Brooke.  As most parents would tell you, when their children are happy, they're happy.

I saw the idea on Pinterest several months ago to create Tooth Fairy money.  The original concept is to use glitter hair spray to give the dollar bill a  magical look.

Earlier in the week, Brooke's tooth started wiggling around a lot and I knew it was a matter of days before it would come out.  After she munched on an apple as an after school snack I thought that would be the day.  So in a mad scramble around town, I tried to find the glitter hairspray.  Much to my dismay the stores I checked with said they only carry it around Halloween.  I had to come up with a Plan B, and that's when I remembered we have glitter finger nail polish here.

I locked myself in the bedroom and brushed two George Washingtons with a thin layer of nail polish.  I don't think the look was as impressive as I had hoped, but it certainly did the trick.  A day later when the tooth finally popped out, the Tooth Fairy left the loot under Brooke's pillow and she woke up excited by this unique looking money.

The only drawback of it was she said to me "It smells like nail polish."  I ignored that, thinking how lucky we are that she's still a kid and believes in the things her older brothers dismissed years ago.  I know it's cliche, but kids really do grow up so fast.  It's important to me to keep part of her a little kid for at least a little while longer. I just need to find some of that hairspray for the next tooth that pops out.

Posted by Kevin Hunsperger at 11:57 AM