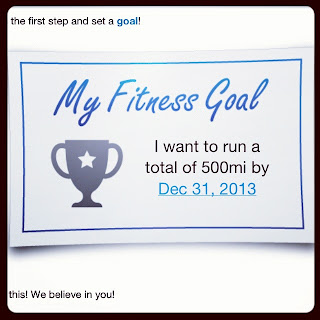 It's been a while since I've posted a "Facing 40" blog.  As the clock struck midnight on New Year's and I kissed my wife and toasted my friends with a glass of champagne, the reality hit that we have now entered the year I turn 40.  Before when it was still months, and months away I kept saying once 2013 starts I'll get back on track.  Well, it's here and it's time.

My friend Kevin, who I told you about several months ago, has once again inspired me.  The man has lost more than 130 pounds. Probably closer to 150 at this point.  In September, we did the Warrior Dash together, along with some other college buddies.  (Brothers in Sigma Nu actually)  It was a blast.  I've already committed to doing it again, as has my wife and some of her friends.


As a way to start training again and get into better shape in general in 2013, we have used our smart phones to set a goal.  Kevin set the example and plans to run 500 miles this year.  Lisa and I quickly got our Run Keeper apps open and set the same goal.  To avid runners, that's not a lot, it's just over 1.3 miles a day.  But I haven't run since November.  I'm hoping this app will help keep me on track along with the motivation of my wife and my friends.

I'll be honest the last few months have been tough.  I feel off the health wagon hard.  I knew it would happen too, and maybe I used that as an excuse.  Halloween wasn't terrible, but then Thanksgiving came up and my grandma unexpectedly died two days later.  I found myself stress eating.  Then of course Christmas rolled around and the weeks leading up to the holiday meant an assortment of sweet treats and other goodies were presented on a daily basis.  As I ate a cookie or two or three I would tell myself I'm going to start running again and working out.  But of course I have been battling an upper respiratory infection since November and I used that as my crutch to not do too much.

It all changes today, January 1, 2013.  The run keeper app is set.  I'm wrapping up some work in my office, then my bride and I will hit the road running.  It's chilly out, there is still a lot of snow on the ground, but I'm not letting that stand in my way.  Here's to new beginnings.  If you've set goals in the New Year, I applaud you.  Good luck, I know you will achieve great success.

Posted by Kevin Hunsperger at 2:11 PM