In the mid-1980's one of the most bizarre characters in the world of professional wrestling was the Missing Link.  He hailed from parts unknown and had his face painted crew.  I'm not sure how exactly to describe his haircut, I'll let the pictures do that for me.

I first saw the Missing Link on World Class Championship Wrestling.  He was a member of Gen. Skandor Akbar's Devastation Incorporated.  Missing Link's trademark move was the head butt, and he came to the ring to Quiet Riot's hit "Bang Your Head."  One memorable moment for me as a kid was when he literally went head to head with the Junkyard Dog in WCCW.  The two exchange head butts on the company's "Parade of Champions" show.  The Dog may have been the only opponent Link met with a harder head than his.  Link ended up pinning JYD, but with the help of Akbar, which promoted a second referee to come out and reverse the decision. In an act of frustration, Missing Link picked up the steel steps and began head butting it. 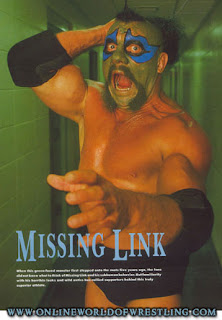 It wasn't long after that big show that the Missing Link's photo appeared in an issue of Sports Illustrated along with a cover story on the WWF.  It wasn't long after that he ended up in New York working for the company.  During his stint in the WWF he faced mostly jobbers, and was under the tutelage of Bobby Heenan.  Near the end of Missing Link's tenure with the WWF (which was only about 8 months), Heenan traded him and Adrian Adonis to Jimmy Hart for the contract of King Kong Bundy.  Link tried and failed to win the Intercontinental title from Tito Santana and collect Bobby Heenan's bounty of "Mr. Wonderful" Paul Orndorff.

Link eventually headed back to Texas, and despite his scary appearance and brutal ways in the ring, he turned face after saving valet Sunshine from an attack.  It was a modern day Beauty and the Beast situation.  His good ways carried over when he headed to the UWF and took on Dark Journey as a valet.  The two feuded with Johnny Tatum and Missy Hyatt among others.

The Missing Link, who was played by Dewey Robertson, died in 2007 after a battle with cancer.  He was only 68 years old.  The WWE has since added him to their alumni page, so check out more videos and stories on this deranged character of the 80's there.

Posted by Kevin Hunsperger at 12:46 PM