All American Pro Wrestling, the premiere independent wrestling company in southern Illinois, returns to television this weekend.  It's exciting to be a part of something like AAPW.  I've had the pleasure of calling the action during season one.  Executive Producer Chris Hagstrom and I reprise our roles for season 2.

The first episode airs Saturday, April 14 at 11 a.m.  Fans in the southern Illinois, southeast Missouri, western Kentucky, and northwest Tennessee area can watch on the local ABC affiliate WSIL TV.  (It's KPOB for our fans in Poplar Bluff, Missouri)  If you don't live in the region, don't worry.  Collision will be available online after each episode airs on TV.  Just head to AAPW's website for all the details.

I don't want to give away too many details, but episode one features a clarification of the AAPW title picture.  There's a battle royal to determine the number one contender to the heavyweight title, a tag team championship match, and an announcement about the new "No Limits" Division.  When season 2 ends, there will be a new No Limits champion crowned. 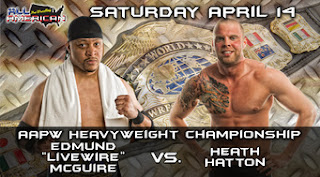 After you watch Collision Saturday (April 14), head out to Harrisburg for the Hands Across Harrisburg benefit show.  AAPW stars will take the ring at 2 p.m. at the Saline County Fairgrounds.  This is a fundraiser for the victims of the Leap Day tornado that killed seven people, injured more than a hundred others, and destroyed a number of homes and businesses in the region.  Hometown hero Heath Hatton challenges Edmund "Livewire" McGuire for the AAPW heavyweight title.  Should be a great match, plus there will be a couple of first round matches in the No Limits tournament.

Expect more big things to come as the season progresses.  I'm excited and can't wait to see how things are going to go.  Also, be sure to tune in to From the Rafters Radio each Thursday night at 7 o'clock CST.  You can tune in by clicking on this link and listen live or catch the replay anytime.
Posted by Kevin Hunsperger at 4:05 PM