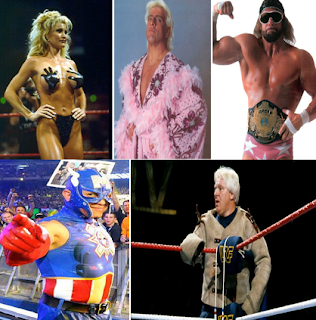 Photos in this blog are courtesy: WWE

The world of wrestling has produced some of the most creative and quite honestly awesome costumes in the business.  It's also generated some of the most ridiculous and hideous wardrobes too.  But today, I'm going to focus on some of my favorite.  There are a ton out there that I've liked through the years, but these are just a few of the ones that stick out to me.  They all popped into my head while driving home from work.

"Macho Man" Randy Savage falls into my favorites twice.  First, I liked his simple pink, orange, or green tights with the three stars on them.  The purple Macho Man shirt, headband, and sunglasses topped with a long, flowing sequin robe completed the look.  And of course when he had Elizabeth by his side, she was always dressed elegantly and always looked like a lady.  The night of Wrestlemania IV really stands out as she had a different dress for each of Randy's four matches in the WWF title tournament.  I don't recall now if Macho Man wore a different pair of tights and robe for each contest or not.  Even when Savage won the "king" title from "Hacksaw" Jim Duggan and adopted the cowboy hat, fringed jacket, and wildly colored tights, he pulled it off.  It's not exactly a wardrobe you'd associate with a man calling himself Macho, but Randy Savage made it work.  It was one of wrestling's most flamboyant yet cool costumes ever.

I like the fact that CM Punk from time to time dons the pink tights with white stars and yellow kneepads and boots to pay homage to the Macho Man.  It's hard not to mark out too when he climbs the top rope and drops the elbow.  Granted it doesn't quite have the same impact that Savage's did, but it's still a great sign of respect to the late, great Macho Man.

It seemed Ric Flair had a different robe every time he came to the ring.  Even when I was a kid and booing "Nature Boy" when he did battle with my favorites like Kerry Von Erich, Bruiser Brody, and Magnum TA, it was hard not to notice how cool Slick Ric looked.  When he wasn't in the long robe and tights, he was in a three piece suit, sunglasses, and Rolex watch, looking like a million bucks.  Flair lived the character from head to toe, and all I can say about that is wooooo!

Rey Mysterio has made it a tradition to come out in different, specially made costumes at Wrestlemania and other special events. He's been an Aztec Warrior, a character from Avatar, and the Flash.  But I think my favorite creation in the high flyer's wardrobe came at Wrestlemania 27 when he was dressed like Captain America.  I'm not a comic book or superhero fan by any means, but I really liked the way the costume looked.  It personified that PG image the WWE had been striving for and made the always likable Rey Mysterio seem even more super human than before.  Despite the fact that the costume didn't give him any super powers (he lost to Cody Rhodes) it was still a memorable look for him.

Bobby Heenan makes the list for his costume at Wrestlemania IV.  When forced to join his tag team, the Islanders in a six match tag match against the British Bulldogs and Koko B. Ware, Heenan outdid himself.  Instead of resorting to traditional wrestling gear, the Brain came out to wrestle in the attack dog handler's uniform.  He was padded and protected not only from the opposing team, but also their mascot, the always eager to bite bulldog Matilda.  The suit worked to protect Heenan and he even scored the winning fall, covering a helpless Koko B. Ware for the three count.

Sable makes the list for of the most memorable costumes as well.  I think it's probably obvious why.  I'm a red blooded American male (no correlation to Marcus Bagwell or Scotty Riggs) and of course this one ranks high on the list.  The handprint bikini made its appearance at the 1998 In Your House: Fully Loaded pay per view.  This of course was a time when the Attitude Era was in full effect.  The WWF was doing whatever it took to win the ratings war, and adding some T&A (a lot actually) to the product helped them win that battle.  Sable and Jacqueline were feuding at the time and had a bikini contest prior to their actual match.  Sable won by popular vote when she dropped her robe to reveal two strategically painted handprints.  Of course the dirty old King Jerry Lawler nearly lost it right there in the ring.  But because it wasn't technically a suit made of material, Sable was disqualified.  How is that possible?


So these are just a few of my favorite costumes from the world of wrestling.  I'm sure in the coming weeks I'll write something about the fashion faux pas' of the past.  Be sure to like us on Facebook and let us know who makes the best and worst dressed lists in your opinion.
Posted by Kevin Hunsperger at 5:29 PM