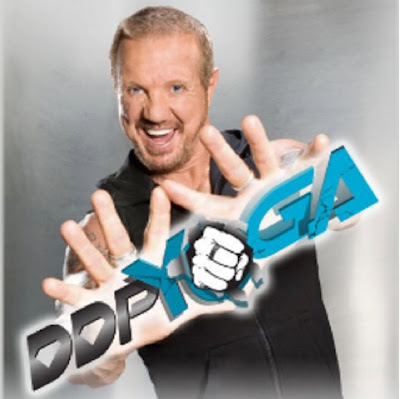 About three years ago, I ordered the DDP Yoga workouts and was determined to beat Kevin in the “Operation Find My Abs” faux challenge. Once I got the DVDs, I wrote a blog to publicly announce my intentions to get in shape in hopes that if I put it out there I would have to go through with the plan. Even with getting a call of encouragement from “Diamond” Dallas Page, the initial euphoria of working out only lasted a few months before I fell back into old habits and let the DVDs collect dust.

Last December when the DDPYoga Now app was released, I figured if I bought a year subscription then I’d have to use it. Otherwise, I’d just be wasting money. This time however something was different. Previously, I was doing the workouts but that was about it. This time, I knew I had to make changes to my lifestyle. The big question was would I be able to make those changes and stick with them.

The first step was getting into the habit of doing the workouts. I had started looking at the new workouts on the app. These would be the first pieces to change my mindset. Previously, one of the excuses I used was “the workouts are too repetitive” because I was watching the same DVDs every day. Now there were new workouts to try out. However, I will admit that after a month of working out daily, I’m starting to slip into the old mindset. I need to refocus.

Second step involved eating. I have been living in fast food joints for the better part of twenty years. Now was time to learn how to use the big white box in my kitchen that produces fire. I waited until after I finished my last job on January 8 before starting this step. Since January 9, with the exception of this past weekend when I wasn’t home, all my meals have been home cooked. So far, I have successfully changed my mindset. I don’t look at fast food as food I can’t eat. Instead, I view it as food I DON’T want. If you’d told me at the beginning of the year, I could go three weeks without Taco Bell and not be craving it; I would have thought you were crazy. Now though, I’m looking forward to improving my culinary skills and seeing what new things I can try in the kitchen.

Something that has helped me over the past month was being unemployed. It’s not a thing that I’d recommend. In fact, if anyone reading this knows of anyone hiring, I could use a job. Anyway, being unemployed gave me more time to integrate more cardio into my daily activity. In the past, when I would be unemployed I’d usually go see a movie either daily or at least three times a week. In addition to sitting in a theater for 2-3 hours, I would always get a pizza and either a water or large Cherry Coke. Not exactly the best decisions if you’re trying to get in shape.

The past three weeks though, instead of sitting in a theater, I spend the 2-3 hours walking. I try to average at least seven miles a day and on really good days, walk 10-12 miles. Again, it comes down to mindset. I would rather be doing something active to pass the time than simply letting the day pass me by while I sit.

My goal when I started, or re-started, was not just finally finding my abs before Kevin finds his. I knew I wanted to lose 20-25 pounds and get into better shape. After the first month, I am well on that path. I’ve lost 10 pounds and feel much better. Unfortunately, I didn’t get a chance to take my 30-day progression photos before writing this blog. You’ll just have to take my word that there’s been a noticeable change. I will get photos before the next installment of the Accountability Blog.

If you’re reading this and either are on a path to better yourself, or thinking about it, Kevin and I are here to help cheer you on your way. I know Kevin has been hitting the gym more. I stand by the DDP Yoga app. Whatever you choose, try to stay positive and keep pressing on. Success isn’t judged by one day and neither is failure.

Posted by Kevin Hunsperger at 6:19 PM