Your iPhone Can Improve Your Health 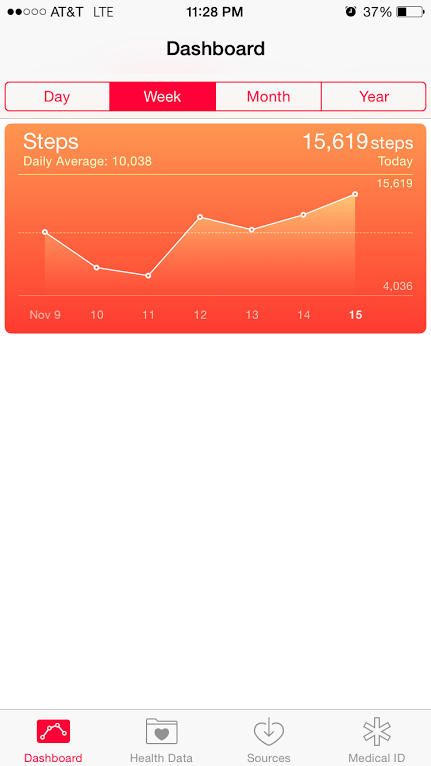 Admittedly, playing Words With Friends, watching old matches on the WWE Network, and sending out hilarious tweets on Twitter are some of my favorite things to do with my iPhone.  This is the third one I've owned, having the 3, 4, and now 6 versions of the Apple product.  When I got the latest, I noticed a new app already installed called "Health."

I didn't give it a whole lot of thought at the time.  I did open the app and mindlessly glance at some of the features on it.  There are a lot of things you can input keep track of, including blood glucose levels, blood pressure, and body mass index.  I'm a pretty healthy guy, so I haven't really messed with it.


The feature I'm now obsessed with though is the "steps" portion of the app.  It tracks how many steps you take everyday.  The key is obviously having your phone with you at all times, which for me isn't a problem.  I don't have it for every step I take, but it's close. My goal each day is to take at least 10,000 steps.  I have a little game I play against myself now that at the end of each week, my daily average has to be 10,000 or better.  Some days I don't get all 10,000 in, so the last two Saturdays I've found myself taking longer walks with the dog to reach my goal.

I've added more steps to my day by walking to the bathroom on the other end of the building at work.  I've always parked my car in the furthest spot from the building, so that helps too.  I have also ramped up my running, despite it being colder than normal here recently.  I know I'm probably not making a huge difference in my health, but I think being more aware and now obsessive about walking those 10,000 steps each day I am having a positive impact.

As I'm writing this, I'm scrolling through the app and finding all sorts of cool functions that I must now explore.  While this may not be the most accurate or best way to gauge your health, it's certainly a step in the right direction (pun intended).
Posted by Kevin Hunsperger at 1:37 PM