Thanksgiving is Still NOT Dead

I'm going to start this off by saying, I don't intend to upset, alienate or offend anyone.  Usually when someone says that, that's the first thing they do.  So if you're angry with me after reading this, I understand and respect your opinion.

I wrote about this last year, and my stance has not changed.  Many stores will be open on Thanksgiving again this year, giving early Christmas shoppers a chance to find low prices.  I've never been caught up in the craze, but I respect those who do enjoy the thrill of the bargain hunt. 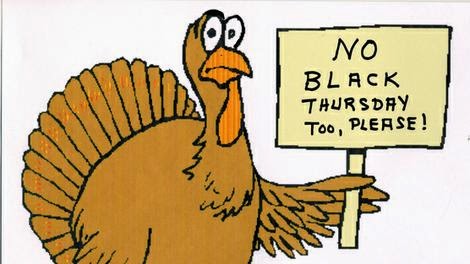 Social media has already started with the call to boycott stores that are open on the holiday.  I get it, I really do.  But I don't agree with it and here's why.  I think it's hypocritical for us to say "don't shop on Thanksgiving" because store employees have to work.  There are COUNTLESS professionals that have to work on Thanksgiving, Christmas, Easter, Kwanzaa, Arbor Day, and everyday in between. I've never once seen anyone call for a boycott on those goods and services.

I'm not looking for sympathy or a pat on the back, but in my adult life I have worked every Thanksgiving except for one.  That was Thanksgiving 2002 and the only reason I was off was because Wednesdays and Thursdays were my regularly scheduled days off at that time.  We ate dinner with family in St. Louis and then loaded the car with two kids under the age of three and drove the five hours back to West Lafayette, Indiana so I could be back to work on Black Friday to cover all the people hitting the stores.

Oh, I didn't mention it earlier, I'm a journalist for those of you not familiar with this blog.  It's not just the people you see on TV who are working.  There are directors, producers, camera operators, and other behind-the-scenes people who are away from their families. Many being paid the same or less than a retail employee.  So if you plan to boycott the stores on Thanksgiving because you don't think it's fair that they're working, then leave the TV off all day.  Parade workers, football players, announcers, crew members and more are working too.

Don't listen to the radio on your way to grandma's house because DJs are working. Hope you filled the tank before you left, as the gas station attendants are working too.  Drive safe, because if you're in a crash, don't call 9-1-1. That would mean you're impeding on the police, ambulance workers, firefighters, and other emergency crews who are missing their turkey dinner.

If you like to catch a movie after dinner on Thanksgiving, stay home this year.  The crew at the theater works every day too.  Let's not forget about doctors, nurses, troops serving overseas, restaurant workers, truck drivers, pilots, flight attendants, train conductors, bus drivers, and even theme park employees.  I could go on and on, but I think you get the point.  I apologize to those I've left out. Yes it sucks working on the holidays.   If you're able to, adjust your schedule.  We've done it for years now.  I'm fortunate enough that I work early in the morning and have the rest of the day off. Not everyone has the luxury, but maybe you can celebrate Thanksgiving on a Tuesday or a Sunday instead.

I'm not saying it's a good or bad thing that stores are staying open on Thanksgiving, but businesses are struggling to stay open. Management has to do what they think best works for them.  If enough people stop shopping on the holiday, perhaps this will end. But since we're back at it this year, I don't think it's going to change anytime soon.  Enjoy your holiday, whether you're at work or home and remember those who aren't with us this time of year.  Things could be much worse.
Posted by Kevin Hunsperger at 2:56 PM