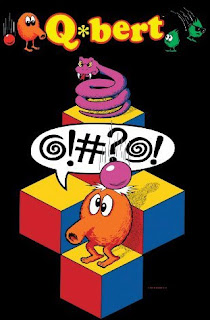 I've used my Way Back WhensDay blogs to talk about some of my favorite things from my childhood. My favorite videos games growing up included Pac-Man, Donkey Kong, and today's submission: Q*bert.  There was something captivating about that little orange creature with a giant nose and no arms.

The point of Q*bert was to get him to hop around a cubed pyramid, changing the colors of each block before advancing to the next stage.  To add to the challenge, different monsters would appear and try to thwart the effort.  Q*Bert never talked, but muttered inexplicable phrases as he went on a mission. Different symbols appeared in a speech bubble over Q*bert's head.  I always imagined he was cussing over the nerves involved in all the hopping and the frustration of the evil doers like Colly, Ugg, Wrong-Way, Sam, and Slick.  Those guys would try to force Q*bert (who the player controls) over the edge of the pyramid.

Q*bert is another one of those video games we'd play at the skating rink or local pizza restaurant.  Eventually, it was released for the Atari.  I still remember playing it at one point on a little black and white TV at my grandma's house, which made it next to impossible to do, since the goal of the game is to change the blocks into different colors.

In 2012, Q*bert caught my attention during the movie "Wreck it Ralph."  His appearance in the film was brief, but brought back fond memories of playing the game in the early 80's.  Hopefully he's appearance sparked the interest in the next generation of gamers.

I think it's safe to safe that Q*bert will go down in history with my other favorites Pac-Man and Donkey Kong as one of the all-time great classic games.

Posted by Kevin Hunsperger at 11:26 AM