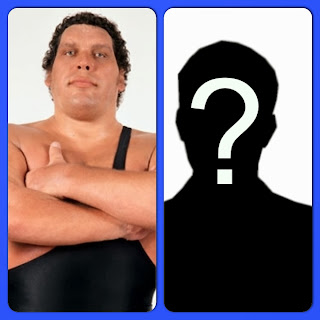 I'm starting a new feature here on the blog.  Each Friday, I'll look at a wrestler from the past and talk about three opponents I wish that star would have had in their career.  I'm kicking things off with the late, great Andre the Giant.  He faced many legends in his career including Hall of Famers like Hulk Hogan, Ric Flair, and Jerry "The King" Lawler.  Even though he only had a reign as WWF tag team champion, Andre is among the best in the history of wrestling.

1.  The Undertaker:  The Phenom and Andre probably crossed paths a time or two in the locker room of the WWF.  Both appeared on the Wrestlemania VII card as the Undertaker beat "Superfly" Jimmy Snuka and Andre was in the corner of the Big Bossman in his quest for the Intercontinental title against Mr. Perfect.  Taker's arrival in the WWF came as Andre was winding down, in fact, he had already retired from in ring action by that time.

Undertaker proved early on he could handle giant challenges, including his feud with the Giant Gonzalez in 1993.  He took it to The Big Show, Yokozuna, and Vader through the years too.  But in his prime, Andre was a nearly unstoppable star.  It wasn't until 1987 that Andre was pinned for the first time in his match against Hulk Hogan.  The Ultimate Warrior is the only other superstar to hold that distinction.  I think in their primes, these two would have put on a helluva match, and the Deadman could have taken Andre to the limit.  Would Undertaker have enough to put Andre down for the three count?  Of the men I'm looking at today, he has the best chance of achieving that nearly impossible task.

2.  Yokozuna: Arguably, Yokozuna and Andre are two of the WWE's greatest big men of all time.  Yoko could do things no other 600 pounder I'd ever seen do in the ring.  If ever there would have been an irresistible force meeting the immovable object it would have been in an encounter between Andre and Yokozuna.  Despite his record with wins over Hulk Hogan, Bret Hart, and The Undertaker,  I think Andre would have reigned supreme in this contest.  The ring would have to be reinforced for this showdown too.

3.  The Big Show: This match has actually been down on the WWE 2K14 video game.  How cool would this match have been as WCW was promoting The Giant (Big Show's gimmick back then) as the son of Andre the Giant.  A classic father vs. son feud, right?  Andre was Big Show's current age 41, when he wrestled Hogan at Wrestlemania III.  Obviously, Andre was nearing the end of his career (and life) at that time.  Big Show is clearly more mobile and appears to be in better shape than Andre was back then.  But if we're going for a match while Andre was in his prime, I'd give the edge to him, beating the man who once claimed to be his son.

Posted by Kevin Hunsperger at 3:50 PM