Thanksgiving is NOT Dead

Since I'm a journalist, I typically do not voice my opinion on things happening the news.  I avoid topics like politics, religion, and anything else that might be considered controversial.  Of the now 1,031 posts on this blog, about  90% of them are about wrestling.  But after weeks of letting this fester, I think now is the time to share with the world.

I saw a post on Facebook recently that became the straw that broke the camel's back.  In short, it suggested that because Black Friday shopping has seeped into Thanksgiving, that the holiday is dead or at least dying.  I disagree for a number of reasons, and if you're in the retail business and reading this, I apologize if my words offend you.

I have worked every Thanksgiving since 2003.  Thursday will mark my 11th consecutive Thanksgiving at work.  I'm not saying that to complain, but rather to let you know where I'm coming from as I write this post.  While I'm at it, I have worked more Christmases than I've been off in my years in TV news too.  It's something that comes with the territory.

Other comments I've seen on social media suggests that we shouldn't shop on Thanksgiving.  If you truly want to buck this trend of stores being open on Thanksgiving, that's a good course of action.  Let's face it, if business is bad, I'd have to believe stores would reexamine the idea of expanding their hours.  However, I think if people are willing to trample one another for a deeply discounted flat screen TV or the latest X-Box, they're not going to mind cutting their visit with Grandma short.  As of Monday (days before the sales start) people are already lined up outside of some Best Buy stores.

If you do plan to boycott the malls and stores on Thanksgiving, are you going to also not watch the news?  What about the football games that will be on TV all day or the holiday tradition of the Macy's Thanksgiving Day Parade?  It's not just the people you see on the screen working, but also the hundreds of behind the scenes folks running cameras, directing the show, and producing things.  They're all working too.  Skip the movies that night, as the men and women at the theater are also spending their holiday away from home, and don't turn on the radio either.

That's just the entertainment side of things.  There are countless other professions who clock in every day, no matter what the calendar says.  Doctors, nurses, police officers, firefighters, emergency personnel, hospital support staff, troops serving overseas, restaurant workers, nursing home workers, gas station attendants, cab drivers, pilots, flight attendants, TSA screeners, train conductors, and bus drivers will all be working on Thanksgiving.  I know I'm leaving professions out, and for that I apologize, but you get the point.

I know this comes as no comfort to the men and women in retail who will spend their first Thanksgiving at work.  That's where new traditions can be born.  You may not be able to eat turkey and the trimmings on Thursday, perhaps a weekend celebration will work out for you. 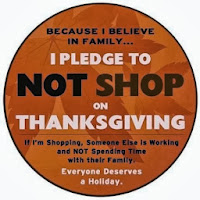 A couple of other points.  Not everyone in this country celebrates Thanksgiving or Christmas.  Some people who work in retail may need the extra money that comes along with spending a holiday on the clock.  Of course, I'm assuming that people who work Thanksgiving will be compensated for it.  If that's not the case, I apologize for this.  Plus, no one is forcing shoppers to head out.  It's a choice.  If someone would rather spend their time looking for cheap gadgets for Christmas instead of hearing Uncle Phil yammer on about his bunions after eating pumpkin pie on Thursday afternoon, so be it.  It's part of being an American and having that option.

In closing, I don't think stores being open will kill the concept of Thanksgiving. When I was a kid, stores were closed on Sundays.  Target, Walmart, Venture, even the malls were closed.  Maybe this was just a thing in Missouri, but when stores did open on Sundays, death did not come to that day.  It's changed sure, but we've all adapted to those changes.

I'm not saying it's a good or bad thing that stores are staying open on Thanksgiving, but what I am saying is, in this day and age when businesses are struggling to stay alive, they have to do what works for them.  If everyone who I've seen on Facebook and Twitter are true to their word, they're actions of staying home on Thursday may interrupt this new concept.  So, what are you doing on Turkey Day?

Posted by Kevin Hunsperger at 12:11 PM