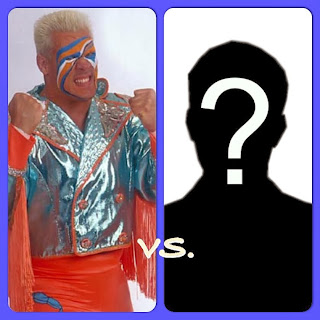 Sting is one of the few wrestling stars of the modern era to not compete in the WWE. Through the years, he always stayed loyal to WCW.  Today, I take a closer look at three guys I wish Sting would have had the opportunity to wrestle.  Not everyone on my list is from the WWE. And for the record, I prefer the "beach bum" version of Sting over "Crow" or "Joker" Sting.

1. Shawn Michaels: Sting came from a history of tag team wrestling, being paired early in his career with the Ultimate Warrior as the Blade Runners, and then with Rick Steiner in the UWF.  He and Chris Adams also teamed briefly after Sting's face turn and of course he and Lex Luger and Nikita Koloff were paired up in WCW.  My point is, like Shawn Michaels, Sting comes from a tag team past.  But then both men excelled and achieved singles success.  Sting and the Heartbreak Kid are among the greatest wrestlers of all time.  They've both had great matches with Ric Flair.

I think that Sting rose quicker to super stardom and maintained that spot much longer.  Michaels of course was sidelined for years with that back injury, but returned to the ring despite the odds.  Of the three dream opponents I'm going to write about in this post, this has been the hardest one for me to pick a clear cut winner.  It would be an evenly contested match in my opinion, but I am going to give the edge to Sting, but just barely.  I think had this match happened around 1994, it would have been one we'd still be talking about today.

2. Ricky "The Dragon" Steamboat: I don't think Ricky Steamboat could have a bad match against anyone.  The Dragon is one of those guys I look back on and remember as a hard worker and great technician.  His matches with Flair from the 70's and 80's, along with the "Macho Man" Randy Savage feud in 86-87 made him the legend he is today.  Despite all that though, I do think that Sting would have the advantage in this face vs. face contest.  The two wrestled for years under the WCW banner at the same time, but I'm pretty sure they never had a match against each other.  If I'm wrong, someone please correct me.

3.  Magnum T.A.: Magnum T.A.'s career was cut way too short after his car crash in 1986.  Luckily, T.A. survived the ordeal, but he was never able to get back in the ring.  For younger readers, you may not have heard of Magnum T.A. or had the chance to see him wrestle, but he was a fast rising star in the mid 80's.  Magnum had already held the United States and NWA TV championships prior to his crash. He had classic matches with the likes of Flair, Tully Blanchard, and Nikita Koloff.  Had it not been for that accident, I'd like to believe he was on track to defeat Flair for the NWA World's Heavyweight Title.  Unfortunately, we don't know if he would have fulfilled that destiny.  T.A. and Sting are the same age, but because of the things Sting went on to accomplish, I'd give the former TNA and WCW champion the win in this contest too.  I feel had Magnum stayed healthy, this match may have actually happened at some point.

Who else would you like to have seen Sting wrestle?  I purposely left the Undertaker off the list because so many people think that's the ultimate dream match.  Speaking of ultimate, I had also consider adding Warrior to the list, as I think the two would have a decent match, with Sting (much like Randy Savage did at Wrestlemania VII) pulling the best out of the Warrior.  Another potential dream opponent for Sting would have been The Rock.

Posted by Kevin Hunsperger at 4:37 PM