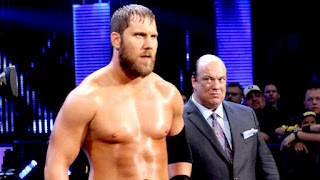 Last week, on my YouTube page and right here I wrote and spoke about some possible "Heyman Guys."  My first pick for the job was Michael McGillicutty.  On the May 20th episode of Raw, Paul Heyman introduced McGillicutty as his new client, complete with a new theme song and name, Curtis Axel.

The name is a tribute to Mr. Perfect Curt Hennig and Larry "the Axe" Hennig.  Personally, I'm stoked about this and excited to see some relatively unknown talent getting an opportunity.  I hope this isn't just a "flavor of the month" move and the WWE allows Axel to develop into the superstar many know he can be.

The fact that Triple H didn't squash him on Raw was a good sign (as I had feared that scenario too).  I'm curious where things are headed for Trips.  Will this lead to him passing the torch to the up and coming Axel?  Time will tell.  Regardless, I'm happy to see this happening to a third generation star who is also able to now acknowledge his legacy for the world to see.

Posted by Kevin Hunsperger at 3:02 PM