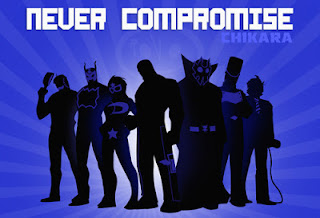 Chikara returns to iPPV this coming Sunday, June 2 with a 4pm Eastern bell time. Long time readers know I’m a die-hard Chikara mark. When it comes to writing about Chikara, I rarely check my fandom at the door. Over the last eight years, I could probably count the number of Chikara shows I didn’t enjoy, or events that happened that I didn’t like on one head. Chikara has been a consistent form of entertainment.

This is the blog where I try and convince you to clear your Sunday schedule for three hours and tell you the $15 you spend on the show is probably the best $15 you’ll spend on wrestling this year. I can try to convince you that. There’s just one small problem. I don’t know what’s booked for the show. My markdom for Chikara is so severe that I don’t like to read results of shows. Instead, I (try to) avoid any spoilers for shows until Smart Mark Video releases the shows and I can watch them for myself. So going into Aniversario I have do not know the results of the May 18th Tag World Grand Prix tournament. I’m assuming the team that won the tournament will be challenging for the Campeones De Parejas, but can I sell you on the match if I don’t know who the challengers will be on Sunday?

The only match I am positive on for the show is the “intergalactic lucadora” Saturyne challenge “Mr. Touchdown” Mark Angelosetti for the Young Lion’s Cup. Saturyne and Touchdown are probably the two best rookies to debut in wrestling in the past three years. Both wrestlers play their roles to perfection and have the skills to match their characters. For wrestling fans who are only used to WWE and TNA wrestling where the gender lines are strongly enforced, seeing Saturyne and Angelosetti mix it up will be a chance realize when done properly inter-gender matches can be both believable and exciting.

As for the rest of the card, there will be a Grand Championship defense as Director of Fun; Wink Vavasseur has mandated a title match on every Chikara show. Beyond that, I’m sure I could go over to www.chikarapro.com and see the full lineup but like I said, I want to see Tag World Grand Prix first. So hopefully Smart Mark Video releases the two shows by Saturday.

Now, even without knowing what to expect, I will be watching on Sunday and I encourage you to do the same if you’re a wrestling fan. There is no other wrestling company who can get me to blind buy a show based solely on their track record. Chikara’s history of excellent wrestling plus logical long-term storytelling is second to none.

I would also encourage you to buy the iPPV because if the rumors are true this will be a historic show. I don’t want to get into the speculation because, well, it’s simply that, speculation. Unlike when Eric Bischoff teased Goldberg’s heel turn as changing the landscape of professional wrestling, if the Chikara rumors are true then it truly will have an impact on independent wrestling.

If you’re a WWE fan and have not checked out Chikara before, I recommend you watch Aniversario because there’s a good chance some of the wrestlers on the show will hopefully be on the WWE roster within the next few years. Chikara is where Antonio Cessaro made his name. Well, actually his name was Claudio Castagnoli back then but you get my point. Luke Harper, who was shown in a vignette on RAW this week as coming soon is also a former Chikara star. Daniel Bryan made a few Chikara appearances and CM Punk was in the main event of the first ever Chikara show. Guess I should also mention Hunico is a Chikara King of Trios winner. I could easily see Mr. Touchdown, Hallowicked, Chuck Taylor, Johnny Gargano, Ophidian or Tim Donst getting at least a WWE developmental contract soon. And if WWE really wants an heir apparent to Rey Mysterio, they should sign Frightmare.

Aniversario is only fifteen dollars. Even if you’ve never seen Chikara and have no idea what to expect, is $15 really that much to take a chance on a new promotion? In a time when pay per views cost $35-40 or more on a monthly basis and are usually filled will matches you’ll see for free on the on next TV show, spending $15 to see something unique shouldn’t be a hard decision.

Chikara’s Aniversario: Never Compromise is live on iPPV Sunday, June 2 and can be ordered at smartmarkvideo.com. I can’t encourage you enough to watch the show. If you’re like me and are burned out by the repetitive nature of WWE and TNA, Chikara is a breath of fresh air. If you watch the show and don’t enjoy it, I will personally offer you a heartfelt apology for talking you into buying the show. Now go order Chikara Aniversario.

After the show let us know what you thought about it on the My 1-2-3 Cents Facebook page.

Posted by Kevin Hunsperger at 2:00 PM