No Gold, But They Deserved It 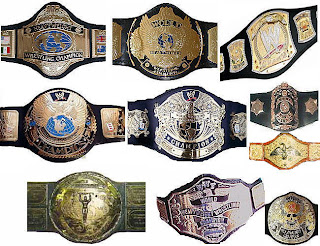 Now a days it seems like many of the WWE Superstars have held gold at least once during their time with the company.  Rarely seen Michael McGillicutty is a former tag team champion, as is jobber to the legends Heath Slater.  In a previous life, Tensai held the WWE Intercontinental title.

Things are much different now than they were 25 years ago.  Hulk Hogan ruled the WWF World title scene, holding the belt for more than four years.  Honky Tonk Man and Randy Savage both had lengthy runs as IC champ.  Demolition, the Hart Foundation, and the British Bulldogs were at the top of the tag team scene.  There was no U.S. title or a second world heavyweight title.  I think had some of the men I'm about to list were around in today's WWE, they would have all won some title along the way.  But these are five guys who never held any sort of gold in their tenure with the WWF.

"Mr. Wonderful" Paul Orndorff certainly had the look of a champion.  I find it very surprising he didn't at least get a run with the IC title.  His feud with Hogan in 1986 and early 87 was legendary in my opinion.  There were actually a couple of different times I thought Orndorff was going to walk off with the title.  I marked out like crazy when he climbed over the top of the cage at Saturday Night's Main Event and he touched the arena floor.  However, the Hulkster was doing the same thing on the other side of the ring.  The match restarted and of course Hogan won.  That's probably the closet Orndorff ever came to winning the gold in the WWF.  I thought he'd be a shoe in for IC champion at some point.  I remember thinking as a kid that he should have beat Tito Santana for the title and not Greg Valentine.  Prior to and after his run in the WWF Orndorff faired much better, holding singles and tag team gold in Georgia, the NWA, and WCW.

When "Superfly" Jimmy Snuka climbed to the top of a steel cage in 1982 in his WWF world title match against Bob Backlund, I thought for sure we were about to see a new heavyweight champion.  As he was perched "25 feet" in the air, ready to make his famous Superfly leap the crowd at Madison Square Garden waited with anticipation.  He came crashing down to the mat with a thud as Backlund rolled out of the way and managed to escape the cage and retain the title.  Snuka also had a series of matches against IC Champ "The Magnificent" Muraco.  Some of those matches were also held inside a steel cage, but Snuka never seemed to pick up the title win.  Much like Orndorff, Snuka found championship gold in other other companies, just not in the WWF.

Bam Bam Bigelow burst on the WWF back in 1987 like a ball of fire.  It was all a part of his gimmick, with the flamed tights and the coolest skull tattoo in the history of the world.  Despite his size, agility, and ability in the ring, the Bammer never came up with WWF gold.  I remember watching the Wrestlemania IV world title tournament and I had the Beast from the East picked to win the whole thing.  You can imagine my disappointment when he lost by count out in round one to the One Man Gang.  After that loss I remember actually typing a letter to Hulk Hogan in my high school keyboarding class telling him to team up with Bam Bam and take on Demolition for the tag team titles.  Ugh, did I just admit that...  I also recall Bigelow attempting to dethrone the Honky Tonk Man during his epic IC title reign, but only ever beat HTM by count out and disqualification.  Even with his mid-90's return to the WWF, he certainly could have had a run with gold, but came up short in that era too.  Truly one of the all time greats though, with or without a WWF title run.

It really blows my mind that Jake "the Snake" Roberts never held any kind of gold during his run in the WWF.  When he arrived on the scene in 1986 as a heel, he was one of the best characters the company had seen.  Jake could work well in the ring and on the mic, two key ingredients to success in the WWF.  I guess the company figured he didn't need a title to get him over with the fans.  His brief heel vs. heel feud with Randy Savage for the IC title was memorable.  Fans were split on who to cheer for, but I think this is what lead to Jake's eventual face turn and feud with Honky Tonk Man.  I thought for a while during HTM's long run with the IC belt that Jake would have won it.  I remember him beating HTM several times via count out, even once in St. Louis with Mr. T as the special guest referee.  He also had a few shots (mostly house shows) against Hogan's world title.

I had to have Chad help me break the tie for my last spot on this list.  I was debating between Hacksaw Jim Duggan and the Junkyard Dog.  In the end, I pick JYD.  I still maintain him not winning the IC title from Valentine at the first Wrestlemania is the biggest miscarriage of justice from that event.  He won the match by count out, and that was as close as he'd ever get to any kind of title in the WWF.  He teamed briefly with the likes of George Steele and Tito Santana, but I don't recall them ever going for the tag team titles.

There were other choices that I did not go with intentionally for the list, like Harley Race and Dusty Rhodes.  When both men arrived in the WWF, they were nearing the end of their respective careers, and a title run would not have added anything to their legacy.  Although the young mark in me wanted to see a Hulk Hogan-Dusty Rhodes world title match.  I don't know why...

Posted by Kevin Hunsperger at 5:51 PM