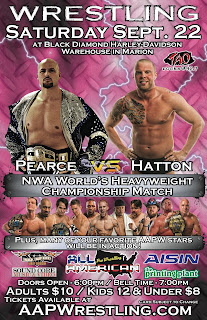 Ric Flair. Dusty Rhodes. Harley Race. They're some of the greatest NWA world's heavyweight champions.  I remember watching all three of these men defend and lose the gold on more than one occasion.  The legacy of the title in the history of wrestling goes without saying.  That's why I'm excited that my friend, Heath Hatton has a shot at that 10 pounds of gold in the coming weeks.

Adam Pearce, the current NWA champion is coming to All American Pro Wrestling.  He'll defend his title against Hatton at the Collision taping set for September 22 at the Black Diamond Warehouse in Marion, Illinois.  This will mark the first time any NWA champion has defended his title at an AAPW show.  It's history in the making.

Not only is this a golden opportunity for Hatton, who continues to climb the ranks in the world of independent wrestling, but it's also a great chance to shine the spotlight on AAPW.  The company has grown and developed so much over the last year and a half.  It's the hard work of a lot of people behind the scenes and inside the ring that's making all of this success possible.  I think the fact that the NWA world's heavyweight champion is coming to our turf speaks volumes about what kind of company AAPW is.

I'm looking forward to calling this match.  I enjoy my job as play-by-play announcer for AAPW.  Every match is a treat, but as a kid I always dreamed of being a part of the NWA or the WWF.  Now, I have an opportunity to be a part of the broadcast.  It's so exciting.

I know how much this means to Hatton as well.  He's been in the gym working out and training even harder than he has.  And I mentioned the metamorphosis AAPW has undergone, Heath has been through a similar transition.  He has developed very quickly over a short period of time.  This is an opportunity he will not squander.

If you're in the southern Illinois, western Kentucky, or southeast Missouri area or even within a few hours drive, I highly encourage you to attend this show on September 22.  Belltime is 7 p.m.  Tickets are just 10 bucks for adults and 8 for kids.  Bring a non-perishable food item and save some dough.  Veterans by the way always get in free.

Check out AAPW on YouTube as well.  And don't forget about us at My 1-2-3 Cents.  Thanks for reading, watching, and subscribing.

Posted by Kevin Hunsperger at 6:23 PM