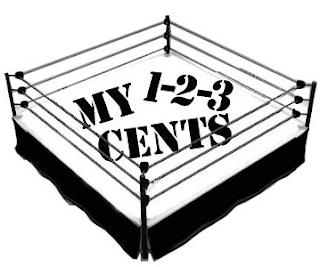 Since I didn’t have a topic in my mind worth writing about, I decided to open up the my123cents Facebook page for questions from our loyal followers and offer my opinions on what was asked.

First up is Baltimore Sun Ring Post columnist and From the Rafter’s co-host Adam Testa. Three part question: 1) Should holding a non-title victory over a champion grant you a title shot? 2) Is this retroactive? 3) When will Kevin face Mike Masters for the AAPW title?

I’ve discussed before how I feel there should be more non-title matches in wrestling. I don’t think every match involving a title-holder should be for the title because in my opinion it devalues championship matches when guys who have no business getting a title shot are in a title match.  Plus, I think having a guy who may not be perceived as a threat to a champion win a non-title match help elevate his standing and makes for a instant made feud.  I point to the recent wins Antonio Cessaro has over United States Champion, Santino Marella. Antonio hasn’t really done much since debuting on Smackdown to warrant a title shot. But having beat Santino on (I believe) two occasions the seeds have been planted for Antonio to logically demand a title shot.

I’m guessing by the third question, the second question is asking if a guy holds a victory over someone before they win the title, should the victor then be considered for a title shot. There is precedence set for this as the Patriot defeated Bret Hart on a RAW before SummerSlam 1997. After Bret won the WWF Title from Undertaker at SummerSlam, the Patriot was then given a title shot at the Ground Zero pay per view the next month. Personally, I think a potential contender should have to beat a reigning champion to get a title shot, or at least maybe beat the champion at least two weeks prior to the champion winning the belt to get a title shot.

As for the third question, I think I speak for everyone who has ever seen Kevin Hunsperger wrestle when I say, Kevin should never step into a wrestling ring again. So, no title shot for Kevin “Cheeseburger” Hunsperger.

Moving on. J.M. Knight asks, The Davey Richards/Tony Kozina incident...It looks like they are now making it into an actual gimmick. Do you think this will further hurt their reputation with them making light of it or will it work to their advantage?

For those that don’t know, the quick recap is last week in Iowa, Tony took liberties with a 16-year-old wrestler he was fighting and legitimately choked the kid out. This was due to Kozina feeling the kid crossed a line with some of the comments he made on Twitter. The next day, Davey, Tony and 2 other guys who were riding with them showed up late to a show after trying to get their singles matches turned into an 8-man tag. After agreeing to a tag-team match against 2 local wrestlers and being paid $350 upfront, Davey and I think he was teaming with Kyle O’Reilly went to the back, started getting dressed for the match, claimed they forgot their wrist tape, went to the car where Kozina was waiting, got in the car and left.  After one of the wrestlers they were supposed to wrestle went public with the story, Kyle O’Reilly tried to explain the situation but basically admitted to all the parts people were complaining about. Davey later wrote his own side of the story and claimed he sent the money back to the promoter and only took the money to teach the promoter a lesson about principle or some lame excuse.  This past weekend, Davey, Tony and the fourth member of their group Darren somebody posted a video where they announced they are now calling themselves Wrestling’s Most Wanted and Team Bandit. They’re turning the situation into a new gimmick for themselves and I’ve heard some rumors some other local promoters may try to capitalize on the situation by booking the group.

My thoughts: In recapping the situation I have devoted too much time to these guys. If you read my blog on why we don’t cover ROH that often on my123cents, you’ll know I’m not a fan of Davey Richards. In fact, if I would rather watch an eternal loop of the Katie Vick angle than watch another Davey Richards match.  So as far as I’m concerned, I hope the situation leads to Team Bandit being blackballed from all wrestling promotions. Unfortunately, since we’re talking wrestling, I have a feeling this will lead to more bookings as promoters will try to cash in on the growing reputation of Wrestling’s Most Wanted. As Eric Bischoff says, controversy creates cash. In this case, it probably means an extra 20-30 dollars for some promotion few people have heard of prior to today.

Trying to erase Davey Richards from my memory, Greg Mehochko asks, What is AJ Lee's shelf life for GM before the "wwe universe" grows tired of her?

This is a bit of a tricky question to answer. I think it all depends on how she’s used and how much TV time she gets each week. Personally, I don’t understand why WWE keeps putting new General Managers into place. I think we need to go back to the way it was when Jack Tunney was President and you only saw the authority figure when there was a major announcement to make. From a storyline perspective, I have often asked, what would happen if the GM didn’t make that spur of the moment Main Event match fifteen minutes into the show? What would have taken place in the last fifteen minutes of the show?
Back to the question asked, I would have to say I don’t know if AJ can sustain her usefulness as GM once WWE moves her beyond interactions with CM Punk and Daniel Bryan. Once those two are out of the equation, what is left for her? Even while she’s interacting with Punk and Bryan, if she keeps coming out in outfits stolen from Stephanie McMahon’s closet, I think the male WWE will grow tired of her quite quickly. Or maybe that’s my chauvinistic views coming into play.

Moving from one AJ to another, my123cents alumni Travis Yates wants to know, Could TNA moving out of the Impact Zone backfire on them? Is it better to have a full television taping with uninformed fans, or small draws with loyal followers?

Good question. For television purposes, you want the venue you’re operating in to look as close to sold-out as possible to make the viewers at home think people want to see the product you’re delivering. If TNA moved out of the Impact Zone, it would be a mistake for them to start booking big arenas to do TV. The arena where Bound for Glory is being held only seats 5000. Are there smaller venues where they could run Impact tapings?
I think one potential problem TNA has created themselves is not running a consistent loop of towns. If you look at ROH, Chikara, or any other Indy promotion that travels, they usually go to the same cities, the same venues or the same areas so they can build on a fan base. This is something TNA should have been doing from day one. I think if they’d had created a 4-5-city loop where they could draw, it would help make moving out of the Impact Zone easier. Look at ECW. They usually did TV from the same arenas. Being in a different venue on a weekly basis helped the show avoid staleness while at the same time they created a loyal fan base in each city that helped make the shows more meaningful.
Right now, I’d say TNA is better to have a smaller, yet vocal, audience than a full soundstage of tourists looking to escape the heat and not knowing who any of the wrestlers are with the exception of Hulk Hogan.

Speaking of Hogan, we’ll transition to the phenom he helped create. From the Rafter’s Producer Chris Hagstrom has a good question for this troubled fiscal times. Is the cost of WrestleMania getting out of hand?

WWE announced the Wrestlemania travel packages today, which go on sale August 13. The packages include a ticket to Wrestlemania, ticket to the Hall of Fame, hotel reservations, Ticket to Axxess as well as transportation to select events. In addition, they offer an extra night at the hotel and a ticket to RAW if once wants to stay 4 days instead of 3. This year they’ve added to the VIP package a tour of WWE headquarters and a Pre-Hall of Fame gathering with a  WWE roster member.  The prices for the VIP packages are,
VIP Package – 3-Night Hotel Accommodations
1 Person - $7,275
2 People - $6,700 per person
3 People - $6,500 per person
4 People - $6,450 per person

WWE hasn’t announced the actual individual ticket prices yet. If memory serves me right, for Wrestlemania 28 tickets were $1000 first 2 rows, $800 ringside then all the way down to $30 to sit in the upper level nosebleed seats.

Is this too much? One could argue that even with the expensive prices, it’s still cheaper than attending the Super Bowl, and easier to get tickets. However, since wrestling is more of a family outing, I can’t imagine most average wrestling fan families of four to be able to afford a $5000 travel package. That doesn’t include airfare and expenses during the weekend such as food and tourist events or other wrestling shows happening over the weekend. Though, I bet WWE would prefer you not to spend money on other wrestling companies.

The prices are steep but there is something about being at Wrestlemania that I think every fan should experience at least once. I don’t know how much the price increase this year has to do with how much the stadium costs to rent. Since it’s a newer stadium I’m guessing the usage fee is higher than an older stadium. With the expectation of Brock Lesnar and The Rock being on the show, how much are they getting paid and is a higher ticket price reflected to help offset their costs.

I do think prices are too high, but realistically speaking, looking at prices for this year compared to the prices for Wrestlemania 22 (the first year Kevin and I attended) not counting the VIP package, which is ridiculously priced, the prices have only gone up about $250-300. I don’t think that’s really too outrageous of a jump for a nine year span. And with Wrestlemania being in the New York/New Jersey area it’s not like it’s being held in a cheap cost of living area of the country.

To summarize, yes I think Wrestlemania is overpriced from a personal standpoint but from a business standpoint I think it’s on average for any big event. And I doubt WWE will lose money on the venture.

That wraps up the first installment of my123cents mailbag. Thanks for contributing questions. Remember to follow my123cents on Facebook and Twitter.
Posted by Kevin Hunsperger at 7:18 PM