John Laurinaitis has been removed of his duties as the Raw and SmackDown! general manager.  Now we're playing the waiting game to find out who will fill the role.  In the meantime, various GMs and commissioners from the past are taking the helm.  This recently spurred a discussion for our Rafter's Roundtable on From the Rafters Radio (search for it on iTunes too)

During the conversation, we talked about our favorite authority figures in wrestling.  As you can imagine, our panel and our listeners all had different thoughts on the subject.  For me, it was Jack Tunney.  While he was not exactly a charismatic figure, he was not on TV each week.  In this day and age of wrestling, I feel like the GM is a played out concept and in many cases steals valuable time from the talent. 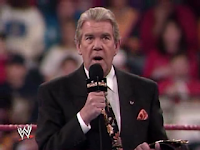 You can probably count on both hands how many times you saw Jack Tunney on WWF Superstars.  Many of his appearances were pre taped messages.  Commentators (Vince McMahon and Jesse Ventura) reminded the audience that Tunney was in charge, but there wasn't that overwhelmingly presence we see now.  I can't remember any specific pay per view appearances by Tunney, much less wrestling at one (I know Johnny is a former wrestler, but look at Eric Bischoff and Vince McMahon)  I know in the pic to the right, Tunney appears to be holding a Wrestlemania mic, maybe it was at WM 4??? Gorilla Monsoon also did a good job in his role as President after Tunney retired.  His involvement was more hands on, but again it wasn't the focal point of story lines. 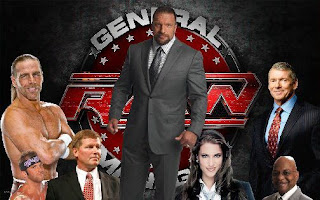 The modern day concept I think evolved when guys like Mick Foley, Steve Austin, and Shawn Michaels (his first time 'retiring') could no longer wrestle, but the WWE still wanted to have some role for them.  I can't completely fault them with that, but I don't think we need the GM, commissioner, or president on the air every week, twice a week.  And while I'm on the subject, what is Vince's role now? We had a GM for Raw and SmackDown!, a chief operating officer in Triple H, and the chairman of the board in Vince.  But I thought last summer he was relieved of those duties.  Seriously, I'm confused and please let me know what I missed.

Okay, that's about it for now.  I'll be back from vacation soon and more regular posts will happen again.  Thanks for reading and share with your friends too.  Oh yeah, don't forget to like us on Facebook.
Posted by Kevin Hunsperger at 9:00 AM