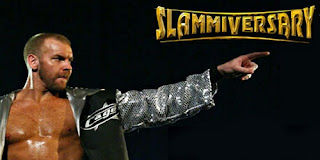 I didn’t get a chance to see TNA’s Slammiversary show on Sunday. Instead, I opted to go to a screening of the John Carpenter “classic” They Live that was followed by a Q&A with “Rowdy” Roddy Piper. I did read reports and reactions to Slammiversary after I got home.

From all reports it appears TNA hit a grand slam with the show. I am curious to see the show, as it doesn’t sound like there was really a bad match on the entire card. My one issue would be the ending to Crimson’s undefeated streak. While I think the streak needed to end as TNA hasn’t shown any intention to push Crimson into challenging for any title so there really is no point to Crimson being undefeated. However, I don’t know if losing in just under three minutes to a returning James Storm was the proper way to go. Given we’re talking about TNA, I will admit this is one of the few items where even if I don’t agree with it, it’s not a major complaint. 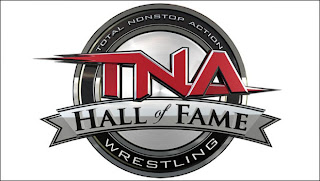 Now, I do have to address the Hall of Fame announcement and the use of Christian (Cage) on the show. While I think Sting is a worthy inductee into the TNA Hall of Fame, I still feel this is being done as a way to beat WWE to the punch. TNA doesn’t need a Hall of Fame. Since Sting has been in TNA for the better part of the last nine years it does make since for him to be in a TNA Hall of Fame than the WWE Hall of Fame. I personally simply don’t see the need for TNA to go there this soon.

Now onto Christian, After Dixie Carter tweeted Christian would be at the show, myself and the rest of the Internet Wrestling Community lashed out with several different scenarios of what Christian would do on the show. Would he be the Hall of Fame inductee? Would he answer’s Crimson’s open challenge? Would he attack Sting backstage and take his spot in the main event and win the title? From the reports I read it seems all he did was come out and verbally put over TNA. One of the one hand, there was nothing wrong with the segment and getting a WWE talent (and current champion no less) to come on your show and say fans should be watching TNA is a positive. On the other hand, what purpose did Christian serve? He was telling fans that bought tickets to a TNA show, or who were watching at home, they should be watching TNA. It’s not like he went on Raw and said to watch Impact. So I still don’t think this was any type of major coup by TNA in return for letting Ric Flair appear at the WWE Hall of Fame ceremony.

Now it wouldn’t be right if I didn’t take to task myself and everyone else who jumped on the bandwagon of criticizing TNA before we knew what Christian was going to do on the show. Sometimes we have a tendency to make judgments and go off the deep end when we think we know what wrestling companies are doing when really we don’t have a clue. Instead of simply being fans and waiting to see what happens next we jump on our keyboards or youtube channels and bitch and moan about how companies are doing the wrong thing. As the Wrestling Roommate pointed out on multiple episodes of From the Rafter’s Radio (Thursdays 7pm CST), “everyone can book shows better than the people actually doing the booking.” The appearance of Christian was another example where we should either get all the facts or wait until the show happens before rushing to judgment. Kevin and I have tried from Day 1 of my123cents to not rush to judgment on angles or events. That’s why we try to stay away from behind the scenes rumors or “breaking news” unless the news can be verified through several sources. So loyal readers, I’m going to make another pledge that if I don’t know what I’m talking about, I’m not going to talk. 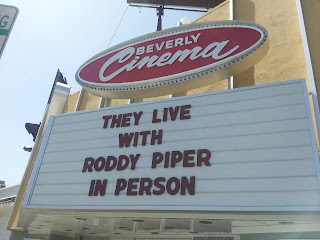 Sunday afternoon, the New Beverly Cinema had a screening of They Live followed by an appearance by the Rowdy one. Unlike a lot of other people in my demographic, I’ve never been a big fan of the movie. I thought maybe seeing it in a sold out show with an appreciative audience I might have a different opinion of the movie. I don’t. I still don’t see myself ever sitting down to watch this when I’m looking for something to watch. However, the Q&A with Piper was awesome. He talked about how he got the role and the fight scene between Keith David and himself, which he claims is the longest fight scene in film. He also made a throwaway comment about doing what he’s told and one time Vince McMahon asked him to paint himself half black. I got video of most of the Q&A and will hopefully have it up on the YouTube page. If you’re interested in it make sure you’re subscribed to either the YouTube page or the my123cents Facebook page. Unfortunately I wasn’t recording when Piper talked about Randy Savage quoting a line from the movie (not the famous kick ass and chew gum line). Piper did a “Macho Man” impersonation then said, “I was lying on the floor of the locker room and Savage was naked shaving his ass with a Norelco.” Oh and he briefly talked about Legends House and mentioned his roommate was “Hacksaw” Jim Duggan. Then he introduced Duggan who was in the audience. 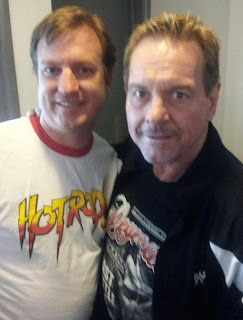 After the Q&A, Piper hung around and signed autographs and took photos with fans. I have to say he was probably one of the top 3 coolest people I’ve seen at Q&A with the way he was interacting with everyone. He took time to engage in brief conversations and seemed genuinely thrilled people were there to see him. Had I not been a Roddy Piper fan before this, I definitely would have been a fan after leaving. In the end, I’m glad I chose meeting the only wrestler who could make me cheer Hulk Hogan over Slammiversary. A once in a lifetime experience vs. a show I can catch on DVD.