It's hard to believe, but Stride Pro Wrestling is back on the road and has another show coming up one week from today. For the first time ever, we're headed to Norris City. We'll be doing a fundraiser show at 400 E. Boyd Street. Wild Bunch Athletics will be benefiting from your generosity that night.

One match that I want to talk about is Red Daniels vs. Chris Hargas. Daniels is the brand new Stride Pro Wrestling Heavyweight Champion. This will mark his very first title defense. As he pointed out on last week's My 1-2-3 Cents podcast, the first time he defended his last championship (the Stride Pro Wrestling Tag Team Titles) he lost. Will he face a similar fate this time around?

Let's examine it. Red and Jake Capone teamed up to win the tag titles in February 2017. Known as the Midwest Mafia they were no doubt the largest team in the history of Stride with a total combined weight of more than 600 pounds. However, just beating up smaller opponents was not enough. The two beat Joey O'Riley and Jay Spade for the gold. They lost the belts in a fatal four-way elimination match in their very first defense.

Red is no doubt haunted by that night. And let's face it, it has happened before. Heath Hatton dropped the Legacy Title back to Tony Flood eight days after beating him for it. Mr. Anthony and Dexter Roswell lost the tag titles in their first defense against Farmer Billy Hills and Scott Phoenix. So there is always that possibility of history repeating itself.

But don't count Red out. Yes, Hargas has had the upper hand against the champ in the past including the historic Buried Alive match. And even though Daniels is coming off a more than 12-month hiatus, he's more focused and determined than I've ever seen him. He's training younger wrestlers at the Stride Pro Wrestling School which has made him better in the ring. While his first defense will be far from a walk in the park, I don't think it'll be his last one. He's not just in their defending a belt. He's working to prove his critics wrong. 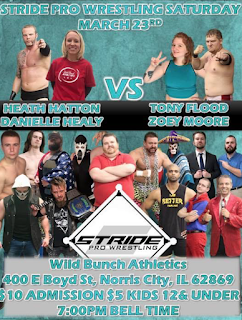 Posted by Kevin Hunsperger at 2:40 PM