Each week it seemed Tony Schavonie would say on Monday Nitro, "This is the greatest night in our great sport." And usually, we ended up being overly disappointed afterward. However, I can say beyond a shadow of a doubt that Strideiversary on March 2, 2019, will go down as the biggest and best show in the company's history.

From top to bottom this show had everything wrestling fans crave. Plenty of action, a little violence, some comic relief and lots of pure wrestling action. I got goosebumps watching parts of it and am extremely proud to have been a small part of such a big night.

I have a full recap planned for Monday's My 1-2-3 Cents podcast as history was made on several fronts. Today though, I'm focusing on the new Stride Pro Wrestling Heavyweight Champion, Red Daniels. But to do that, we have to do a quick history lesson.

Red Daniels is the first graduate of the Stride Pro Wrestling school. He worked hard to get through the training and entered into a pretty intense feud with Chris Hargas in 2017. The rivalry came to an end when Hargas buried Red alive in December 2017. We hadn't seen nor heard from Daniels until recently he did an interview with me, revealing he's been working backstage at Stride to train the men and women coming through the Stride School.

At Strideiversary the now "King" Chris Hargas (who has turned his back on the fans) was pitted to face Bo Sawyer in the finals of the Stride Cup Tournament. The winner was to receive a contract for a title match at any time. As Bo made his way to the ring, his former partner Jason Tiller attacked and Hargas joined in. Because the bell hadn't rung yet, there was nothing the ref could do. Sawyer was rendered unable to compete and General Manager Sam Hunter, with a shovel in hand, announced he's dug up Red Daniels.

The pop from the crowd was deafening. I got goosebumps as Red hit the ring and battled his old nemesis. Red scored the pin and the audience went nuts again. He left with his briefcase and cup and then it was time for the main event. Heath Hatton and Tony Flood put it all on the line in a 60-minute iron man match. I'm proud of how both men performed, despite the interference from a masked man we've seen torment Hatton for months now.

Hatton ended up winning the match five falls to four. However, his celebration was short lived. He unmasked the mystery man revealing his now former friend Jay Spade. Spade and Flood then destroyed Hatton with a double superkick to the face. That gave way to an opportunity of a lifetime as Red quickly cashed in and made short work of the new champion. 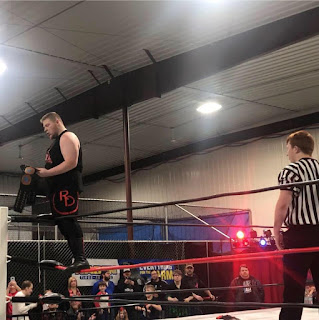 Just like that, Stride Pro Wrestling had two champions in a matter of moments. Red Daniels, in his words, went from six feet under to the top of the mountain. Congrats.  You've earned this. Spade and Flood though, I pity you guys. You've picked the wrong guy to screw over.