One of the best parts of being involved with Stride Pro Wrestling is the friendships I've made. I met Lane Austin in March 2016 with Stride's first show. We'd met online before that but the first in-person meeting happened at that inaugural show. Lane was Stride's only referee at many shows and we'd always chat before the start of each match to make sure we were both up on what was supposed to be happening next.

We'd often go out to dinner after shows too recapping the evening's action and sharing stories of our favorite Superstars from childhood. His, by the way, is the "Macho Man" Randy Savage. Nearly a year ago Lane, who has type one diabetes, announced his health had taken a turn for the worse. He started dialysis and was put on a transplant list for a new kidney and pancreas. This, of course, took him out of action for a number of months but he returned to ref on a part-time basis on show nights. 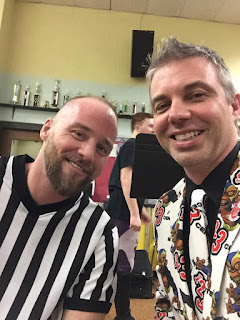 Then in November Lane got the call. He got the kidney and pancreas he needed. He's been taking time to recover from the surgery and it's been a while since I've seen him. We tried getting together a few times for a visit but he wasn't up to it. So imagine my surprise Saturday night when I walked into the locker room and he was sitting there with a huge grin on his face. I learned he was going to be the special guest enforcer for a match between Ax Allwardt and "King" Chris Hargas. Hargas' manager J. Wellington Beauregard was the referee in the ring, but Lane was there to make sure the rules were followed.

I'll be honest  I got goosebumps when I introduced my friend's return to the ring. The crowd clearly missed him too as there was a notable pop when he came out. He did exactly what he was tasked to do and when J. Wells continued to ignore the rules, Lane took action and counted the three for Ax to win.

I don't know what the future holds for Lane as far as being well enough to ref on a regular basis. But I do know it was great to see him back in the stripes and maintaining law and order in Stride.

Posted by Kevin Hunsperger at 8:01 PM