J. Wellington Beauregard and Ax Allwardt used to go together like peanut butter and jelly. The duo first connected in 2012 in All American Pro Wrestling. It all started when J. Wells bought Ax's contract from Gaylord Stephens.

Even after Ax dropped that title the two remained focused on success. And once again it was found when Scott Phoenix joined the duo and Maximum Overdrive was born. The team won tag team gold and quickly become one of my favorite tandems. However, J. Wells had his eyes on another prize, the DR Party.


In late 2017 he made those intentions known as Beauregard and Phoenix screwed Ax out of the tag team titles. Since then, Ax was been exacting revenge. He and Heath Hatton won and lost the tag team titles, in part because of J. Wells' interference. The former champs even lost a tag team match against Tony Flood and J. Wells in September and Ax was dumped from a battle royal by Beauregard; further fueling the flames of disgust. 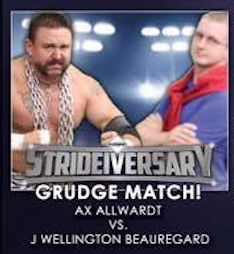 Now, thanks to a victory over J. Wells' latest charge, "The King" Chris Hargas, Ax gets his hands in a one-on-one match against Beauregard. The two will lock horns Saturday night at Strideiversary. If I were J. Wells, I'd make sure next of kin is nearby to help identify the parts left behind. Ax's frustration has been building for more than a year. We'll see you on Saturday at 6:30 p.m. (600 N. Carbon Street in Marion, Illinois) 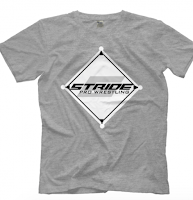 Click to shop
Posted by Kevin Hunsperger at 6:18 AM