Pro wrestling is known for wild and crazy events. I've witnessed countless things first hand that people who aren't fans simply wouldn't get. But there are also kinder, gentler moments. And luckily Saturday night I was on hand for one at the Stride Pro Wrestling show.

Tony Flood, a long time bad guy in the ring but a good guy behind the scenes, came to the ring after intermission. In his hands, two champagne flutes and a bottle of sparkling grape juice. After all Stride Pro Wrestling is family friendly. Tony wanted to celebrate his upcoming championship opportunity for the vacant heavyweight title. Tony invited his girlfriend Macey into the ring to join in.

The two shared a toast and Tony thanked Macey for always being there for him. Then the former champ dropped to one knee and in front of a now cheering crowd (odd for Tony Flood), he asked for Macey's hand in marriage. She accepted and the two shared a kiss as the fans applauded loudly. 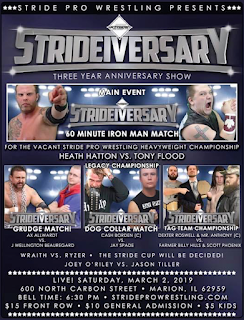 The celebration was shortlived as Heath Hatton and General Manager Sam Hunter entered the picture to snap Tony back to reality. The match between him and Hatton will be a 60-Minute Iron Man Match set for Saturday, March 2 at 600 North Carbon Street in Marion, Illinois.

But back to the important part of this post, not to say that the title match isn't. I want to congratulate Tony and Macey and thank them for sharing that moment with the fans of Stride and all their friends backstage. Since meeting Tony three years ago, I've seen him experience the highest of highs and the lowest of lows. I'm happy to see he is so happy again.  Cheers to the couple and may the best man win at Strideiversary.

Posted by Kevin Hunsperger at 2:35 PM