There's a bean in my boots

I had the pleasure over the weekend of serving as a judge for the 8th annual Southern Illinois Chili Cook-Off. It's the first time I've done anything like this and it was quite an awesome experience. The theme this year was Disney and as a judge, I felt the need to dress up, so I donned the Jesse costume my mom made a few years ago for our trip to Disney World. My buddy Tom Harness also judged and he wore the infamous Pinocchio costume.

The contest is a fundraiser for four different groups here in southern Illinois. The Lighthouse Shelter, Fowler-Bonan Clothes for Kids, Heartland Rotary iPads for special needs children and Kozy Kidz (coats for kids) split the proceeds from this event. 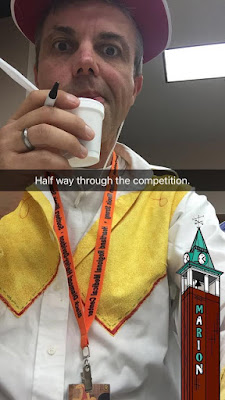 Judging was not easy by any means. The group tried 26 different kinds of chili. They were judged on things like taste, aroma, consistency and color. It was hard getting narrowing it down, but eventually, we were left with the top six. Then there was a tie so after it was all said and done we had 34 samples of chili throughout a 90 minute period. I'm still stuffed as I write this.

I would not change the experience for anything. It was a blast and getting to chat with the contestants and other friends along the way made the day even better. I'm already looking forward to next year's event either as a judge or a contestant with the Craftbeericans. We also got to try a very new version of Sam Adams beer. Look for the review on our Facebook page.
Posted by Kevin Hunsperger at 3:04 PM