SummerSlam: A to Z: Dominick 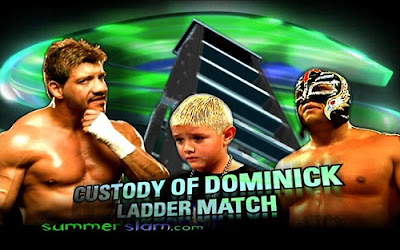 SummerSlam events through the years have featured ladder matches for the Intercontinental and World heavyweight championships.  But in 2005, a ladder was erected for the custody of a WWE Superstar's only son.  That's right.  Rey Mysterio battled Eddie Guerrero in the first and only (as far as I know) custody match.

The storyline had been building for months as Mysterio and Guerrero had a falling out after enjoying some time together as a tag team, even winning the championships.  But as the tension grew, Eddie threatened to reveal a secret about Rey's past.  Long story short, that secret was that Eddie was the biological father of Rey's  son, Dominick.  The two argued back and forth on the issue until Rey challenged Eddie to the custody match to settle everything at SummerSlam '05.

High above the ring hung a brief case containing the custody papers for the boy. I'm guessing Dominick was probably about 10 at the time.  The announcers played it off as Eddie not really wanting custody.  He just wanted to tear apart the Mysterio family and get a psychological edge over Rey.  There were a few times it looked liked he'd get his wish, but Dominick and Eddie's wife Vickie would run interference.  Rey won and the family unit stayed together, waiting for the next creep to come along... which happened to be CM Punk.  But that's a story for another blog.

The storyline was unusual and in my opinion both Rey and Eddie were talented enough to tell a story in the ring without the soap opera element.  The move did give young Dominick a chance to step into the spotlight and let the fans connect with the Superstars on a personal level.  Adding the boy to the story made us care that much more.  I think Vickie benefited the most as she would eventually become a regular member of the WWE roster after Eddie died a few months later.

Posted by Kevin Hunsperger at 7:48 AM