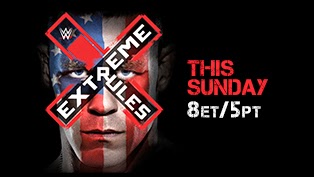 @kevinhunsperger & @my123cents on Twitter
Listen to the podcast here!

Because I'm an idiot, I had forgotten Extreme Rules is this weekend.  I would have included my predictions in this week's podcast (my interview with "Beautiful" Bobby Eaton).

I'll preface this post with a reminder that I am not a fan of gimmicky pay per views.  TLC immediately comes to mind and Extreme Rules is a close second.  There are a few Wrestlemania rematches (in one form or another) and I get that the WWE wants to spice things up.  But I don't see the need to have silly stipulations added.  I'm looking at the "Kiss My Arse" match as I say this. 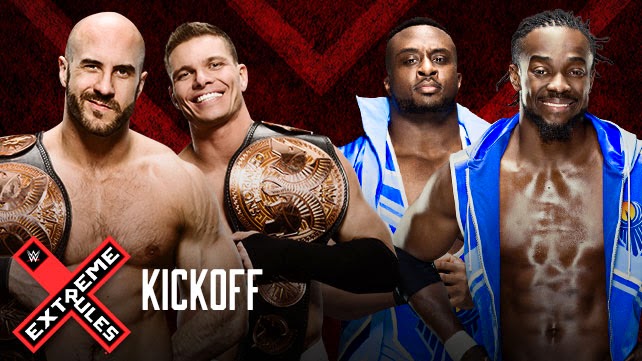 Tag team title match:
Tyson Kidd & Cesaro (c) vs. The New Day.  Once again the tag team titles are being defended on the "pre-show", but I've said it before.  I don't think the "pre-show" or kick-off matter as much now that the WWE Network is in place.  I like Kidd and  Cesaro.  I WANT to like The New Day.  Kofi to me is one of the most under utilized guys on the roster.  The same could be said for Kidd and Cesaro too. This should be a good match, but I think the champs will (and should) retain. 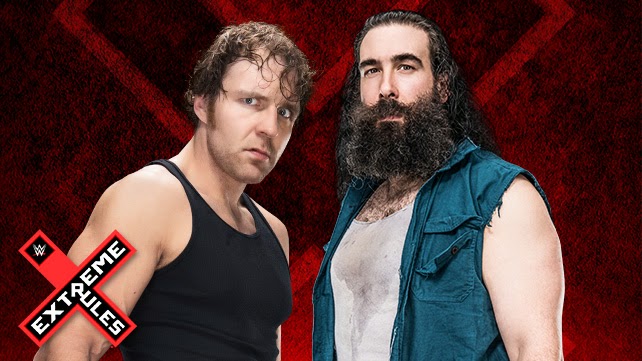 Chicago Street Fight:
Dean Ambrose vs. Luke Harper.  I don't mind the gimmick being involved in this match.  The build up to it has been good.  These two have beaten the hell out of each other in the weeks leading up to Extreme Rules.  While I'm more for guys being kept apart physically prior to a pay per view, I think it's becoming more rare.  This match will be like watching a car wreck.  I'm picking Ambose to win.  I like both competitors, but I think Harper and Erick Rowan should still be a tag team to help boost that division. 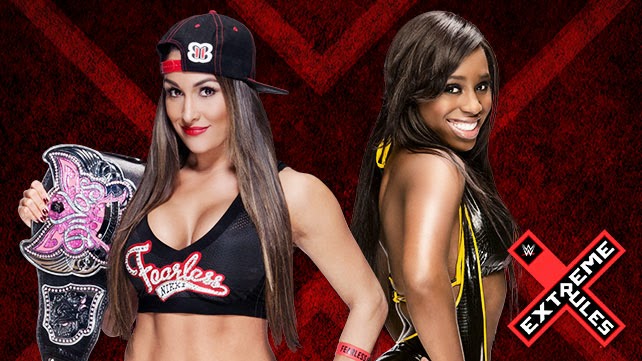 Diva's title match:
Nikki Bella (c) vs. Naomi.  I'm going to put this out there, I am not a fan of the Bella Twins.  Yes, they're beautiful women.  Yes, they've improved greatly in the ring.  But their characters annoy me.  I know that's probably the point, but it's to the point that I'd rather see any other diva on the roster with the gold than Nikki.  Naomi is very athletic and has come a long way in a short time too.  I don't know though that's she's going to be the one to unseat Nikki.  I like Paige and I love Charlotte on NXT.  Would love to see her in the mix on the main roster soon.  That being said, I guess I'll go with Nikki to retain. 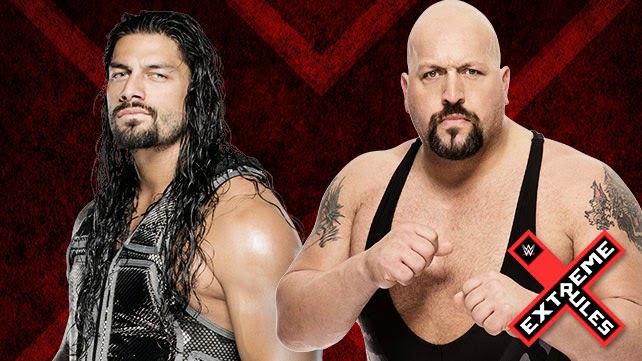 Last Man Standing:
Roman Reigns vs. The Big Show.  I think the crowd will be on both men during this match.  I'm going to just restate for the record, I like Roman Reigns.  I think he's still rough around the edges, but he will eventually get to the top of the mountain.  The producers or agents for this match will need to come up with something creative and cool to give Reigns a big win in this match and a better ranking with fans. 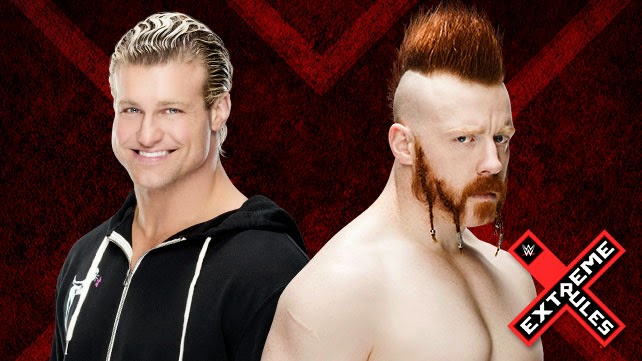 Kiss My Arse match:
Dolph Ziggler vs. Sheamus.  I like the heel Sheamus much more than his persona as a face.  He's embraced the bully gimmick with his look and his actions in the ring.  This match has the potential to steal the show in my opinion, but I hate the stipulation that's been added.  I would be more willing to get behind it (no pun intended) if this was to wrap up their feud. I think this rivalry could carry on for a couple of months.  If things are going to continue, I'd pick Ziggler to win to shut up the overbearing bully.  But because Sheamus just returned, I think having him lose a high profile match this soon would hurt his mojo, so for that reason, I pick Sheamus and his lily white arse to win. 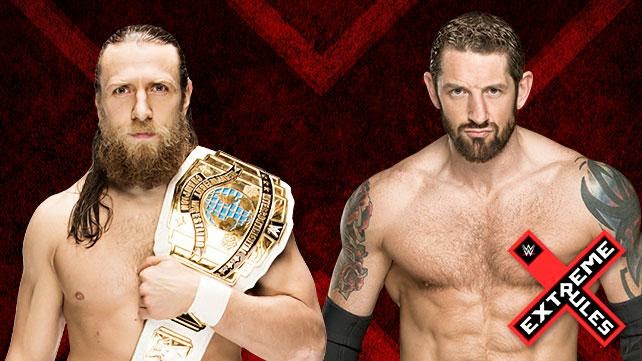 Intercontinental title match:
Daniel Bryan (c) vs. Bad News Barrett.  As I write this, the match is still scheduled to happen.  I know Bryan got hurt on the recent European tour and there has been a lot of online speculation as to whether he's going to be able to wrestle Sunday.  Even more are questioning if the man behind the Yes Movement will be able to continue his career.  I certainly hope he's healing and not putting his health or life in jeopardy by continuing in the business.  Because of all that uncertainty I think the WWE will take the belt of Bryan to avoid having to hold a tournament or battle royal to determine a new champ.  But if Bryan really is okay, he needs to win this and continue to build some stability and prestige for the IC title. Russian Chain match for the U.S. title:
John Cena (c) vs. Rusev.  WWE claims this is the first ever televised Russian chain match.  I don't have the time or the energy to find footage to dispute that claim, but if you know different, please tell me.  Even though I think Rusev beating Cena at Wrestlemania would have helped his career and add value to the U.S. championship, it's hard to claim that putting it on someone with Cena's star power was a bad decision.  There are plenty of pros and cons as to whether Cena should retain, but with it being a gimmicked match somehow losses seem to matter less.  I think Cena will keep the gold, the story will focus to the impending split between Lana and Rusev and Cena will continue his open challenge. 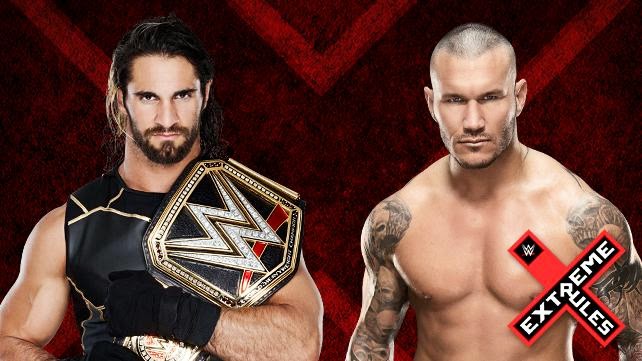 Steel Cage match for the WWE World title:
Seth Rollins (c) vs. Randy Orton.  Orton got an impressive win over Rollins at Wrestlmania.  But he used the RKO to do it.  That move has now been banned.  Kane, who is an alleged ally of Rollins, will be keeper of the gate.  Seeds of doubt are planted as to whether Kane will turn on Rollins.  Can the cage keep out J&J Security?  I think Rollins needs a win over a top guy like Orton in his first pay per view title defense.  But as I write this I wouldn't be surprised if Orton walks out champ.  I won't boycott WWE if that happens, but I will be extremely (this time the pun is intended) disappointed.

Posted by Kevin Hunsperger at 4:10 PM