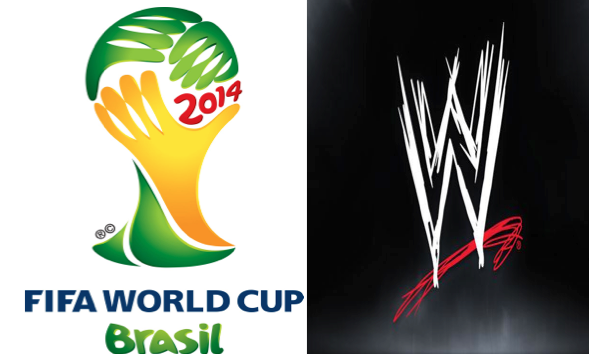 My goal (pun intended) with this post isn't to rile up soccer fans or wrestling fans, but instead to bring about awareness for both professions.  It all stems from a conversation I had with some co-workers earlier today.  Each side was arguing over the global reach of their respective sport. (Yes, I know there are those who will argue the use of the word "sport" when talking about wrestling, but work with me here.)

I actually did some research for this post and I think that if you're a fan of either, this will be good information for you.  I am not a sports fan in general. But I respect athletes who go out there and perform, whether on the field, on the ice, or on the court.  It should come as no surprise, I have tremendous respect for the men and women who step through the ropes of a wrestling ring.

I think in general, Americans do not fully understand the reach that soccer has globally.  According a CNN report,  FIFA is working with more than 700 television, radio, and Internet outlets on providing coverage of the 2014 World Cup.  In this country alone, more than 11 million people tuned in for the USA vs. Ghana match.  That number went up to more than 18 million who watched USA tied Portugal on ESPN.  I can't find worldwide stats, but some more examples: 14.2 million people watched the England-Italy match in the UK.  That's just in the United Kingdom.  Thirty-five point one million fans watched in Japan as that country's team lost to the Ivory Coast.  That's more than double the next highest sporting event on Japanese television.  Very impressive.

The point was I trying to make with my colleagues is that the WWE is more than just a wrestling company in North America.  The Superstars and Divas perform all over the world.  According to their website, WWE has offices in several cities, including London, Mumbai, and Tokyo.  The programming is broadcasted in 150 countries, 30 different languages, and reaches 650 million homes worldwide.

These are just a few examples of the global reach of each.  I'm impressed with the numbers for both.  Something else to consider these days is the reach via social media.  As of June 25, 2014, there are 33.2 million likes on the official FIFA Facebook page.  Compare that to the WWE's Facebook page with just over 20.2 million likes.  It's a different story with Twitter though.  The WWE's page has 4.41 million followers with FIFA's account garnering 2.29 million.


I guess the point of it all is that both of these forms of entertainment are wildly popular around the world.  Until recently, I hadn't taken into account the popularity of soccer.  I hope soccer fans consider the worldwide appeal of the WWE and wrestling as well.  It's big business in places like Japan, Mexico, and Europe.  Plus, the only time our guys bite one another is when it's in the script.  I'm looking at you Luis Suarez.

Posted by Kevin Hunsperger at 12:38 PM