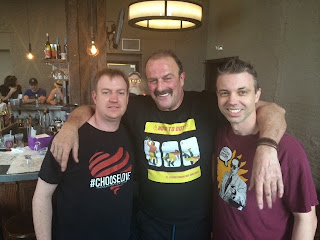 I'm having some iPad issues and internet issues here in New Orleans, but I wanted to update you on our Wrestlemania weekend. We actually drove to New Orleans, leaving southern Illinois Wednesday evening and making a stop in Tunica, Mississippi. That's the site of the Jerry "The King" Lawler Museum. It's filled with lots of great memorabilia including old costumes, crowns, artwork, belts, and photos. We'll post pics on the Facebook page soon.

We arrived in New Orleans Thursday night. Chad has a friend who works with WWE and we were able to hang out with her and some of the NXT guys on Bourbon Street. For me the highlight was Drew McIntyre coming up to me and shaking my hand.

Friday afternoon we met Jake "The Snake" Roberts. He was doing a meet and greet at a restaurant here. That night we went to the Legends of MidSouth show where we met Mickie James. I had interviewed her back in 2011. Thanks to Burt Prentice for the hookup. The show was pretty good. The Rock n Roll Express won the TCW tag team titles. I also got to see an old friend in "Golden Boy" Greg Anthony wrestle and win. "The Pope" Elijah Burke won the Junkyard Dog Memorial Battle Royal, which was cool too.

Burt also hooked us up with WrestleCon tickets for Saturday morning.  We didn't do any wrestling photos, but we talked with a few of the guys. It was fun and I love seeing the wrestlers up close like that. They're all pretty cordial, and yes I realize they're hoping you'll buy something.

Tonight is Hall of Fame, I'm hoping we're able to do a video update for the YouTube channel then. Thanks for reading.  We've run into several readers already, which has even very cool!

Posted by Kevin Hunsperger at 3:33 PM