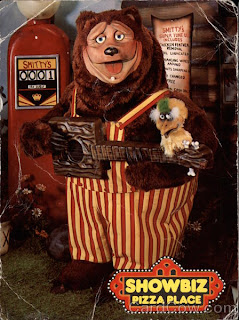 Until I was in the 5th grade I did not like pizza.  In fact, I hated it.  One day I will blog more in depth about that and how I came to love the stuff, but for now, I'm reflecting a childhood memory that us Gen Xers will all remember fondly: Showbiz Pizza Place.  The company started in 1979 and offered families a place to go and enjoy an evening of food, entertainment, and fun.

I don't remember going to see Billy Bob (an animatronic singing bear) and his Rock-aFire Explosion Band very often as a kid, but when we did go, it was a treat.  I actually think the first time we went it was around 1982 when we were vacationing in Florida.

There was always something magical about that place.  The music was blaring with the robotic characters at the helm.  There was Fatz, Mitzi, Dook, Beach Bear, Ralph & Earl, and Looney Bird all led by that hillbilly clad bear, Billy Bob.  There were video games and games of skill that spit out tickets.  Those tickets were then exchanged for cheap trinkets at the gift shop, usually it was something that was lost or broken before the end of the car ride home.  There was also pizza involved, but as a kid it was all about playing Skeeball, and less about eating.

Showbiz was the perfect place for a kid's birthday party.  It was one stop shopping for parents.  Kids could get hopped up on sugar and caffeine then burn off the energy in the ball pit or playing Whack-a-Mole.  Someone would slip into the Billy Bob costume and it seemed as if that robot on the stage had a life of its own as he would greet eager children and shake hands with his giant paws.  There was the occasional brat who would kick Billy in the shin or pull on his suit in an attempt to unmask the character.  It was like getting that Disney World experience of meeting a character without the high ticket prices and long lines.

Eventually Showbiz Pizza bought out competitor Chuck E. Cheese (fun fact: the E stands for Entertainment).  I don't know all the logistics, but I remember the local Showbiz changed things and became Chuck E. Cheese.  Billy Bob and his band mates weren't sent packing into nothing more than faded memories.  Years later, I would find myself working there (that's a story for another day too)

Currently, there are no Showbiz Pizza Places left in the United States.  But I did come across this website that is a step back in time.  You may also come across a few of the old games at your local Chuck E. Cheese.  I remember the one I worked at had the Billy Bob carousel for years.  Before I left that job, my boss gave me an old Showbiz Pizza Place coloring book.  It's probably around here somewhere still.

Chuck E. Cheese is still out there, and while it's fun going there and reliving those days of when I was in college and working there, I miss Billy Bob and the Rock-aFire Explosion Band.  Great times...

Posted by Kevin Hunsperger at 12:33 PM