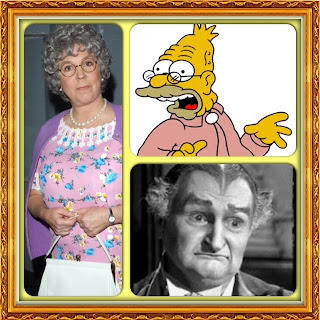 I debated doing this as an all wrestling blog, but thought it might be more appealing if I included other famous grandparents as well.   There are plenty of great third generation wrestling superstars out there, and I've talked about that recently in my Legacy blog.  So here are some of my favorite grandparents from TV, movies, and wrestling.  I posted a more serious grandparent blog recently, you can read it here.

Thelma "Mama" Harper is one of my all time favorite television characters.  I remember when I was really young catching Vicki Lawrence play the character on the Carol Burnett Show.  The skits were popular enough to take Mama to prime time and eventually into syndication.  In the early episodes of Mama's Family, she had two grandkids living with her, Buzz and Sonja.  I preferred the relaunch of the show with Bubba.  Mama was a grumpy old woman who really did love her family, but didn't always express it.  Memorable Mama moments include her and Naomi teaming up to wrestle the Masked Mables, Mama donning a white beard and red suit and playing Santa, and the family's trip to Hawaii.  I was fortunate enough to interview Vicki Lawrence about 10 years ago when I lived in Indiana.  A few years ago I was able to see her Vicki Lawrence & Mama: A Two Woman Show in Carbondale.  If Mama's Family is ever on, you can bet I am tuning in and laughing at the jokes that are now 30 years old.

Abraham "Grampa" Simpson, like his dimwitted son Homer, makes me laugh whenever he's on the Simpsons.  In the nearly 25 years of the show, Grampa has provided plenty of laughs.  Some of my favorite quotes from him include, "It'll be a cold day in hell before I recognize Missouri as a state.", "I'm gonna smooch her like a mule eating an apple.", and "I'm in love... no it's a stroke."  Grampa has a rich history too, at least according to him.  He was a war hero, former professional wrestler, and the creator a love potion.  We've seen on the show, he was a tough dad when Homer was growing up, but has turned into a lovable old man who annoys his family when given the chance.  His grandkids Bart, Lisa, and Maggie take full advantage of him when they can. He's one of Springfield's most interesting characters in my opinion.

Sam Dracula was not your typical grandfather.  He was a vampire and a funny one at that.  Better known to viewers of The Munsters as Grandpa, he was the live in, thorn-in-the-side of his son-in-law Herman Munster.  Even though he and Herman would fight a lot, they also had some very funny and entertaining adventures together. When trouble started brewing, Grandpa would turn himself into a bat and fly away.  The one thing that stuck out to me was the way he'd laugh. Grandpa always did his best to pass on advice to his little grandson Eddie and mortal granddaughter Marilyn.  This show too has a wrestling connection (I didn't plan this), as Herman donned a mask and wrestled in an episode as Grandpa watches on TV.  Even though the show lasted less than two years, it lives on today in syndication and will make generations to come laugh.

These are just a few of my favorites.  Here's a whole lot of honorable mentions (in no particular order).  Thanks for reading.

Posted by Kevin Hunsperger at 10:45 AM